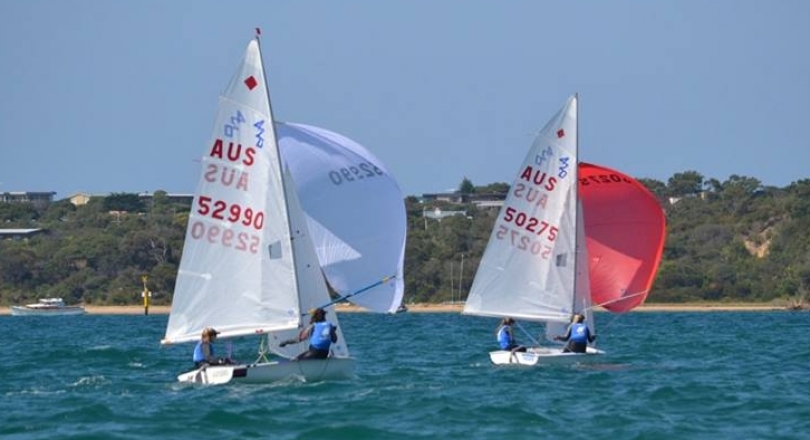 The 2014 Australian Sailing Youth Team will represent Australia at this year’s ISAF Youth Sailing World Championship (Under 19) to be held in Tavira, Portugal from 12-19 July 2014.

The final day of racing saw the 193 crews in the six championship classes get a few more races in after a weak breeze on Thursday’s penultimate day had cancelled racing in most categories. Today lifted the total number of races in all classes to ten.

The 420 class field 37 teams from Australia, Hong Kong and New Zealand. As the Championship unfolded, the race track was dominated by strong performances from the female crews and New South Wales crew of Dana Tavener and Catherine Pagett, who not only took out the Australian Girls Championship title but also the overall win in this class. Based on combined results and after finishing several places ahead of Tavener/Pagett at the 420 Nationals in Sorrento a couple of weeks ago, it was second placed Western Australian crew of Nia Jerwood and Lisa Smith, who were confirmed to represent Australia in this 420 girls event at the ISAF Youth Worlds.

In the male category, the upset of the day was the New Zealanders Sam Barnett and Zak Merton beating Western Australians Emerson Carlberg and Lachlan Gilmour to the top spot. Carlberg/ Gilmour had led the New Zealanders all week, but were disqualified in Friday’s second race after crossing the start line too early. As the top Australian 420 male crew, Carlberg and Gilmour still managed to secure their spot on the Australian Sailing Youth Team.

Fifteen-year-old Emerson Carlberg was very happy about this opportunity of competing at his first ISAF Youth Sailing World Championship:

“Following our class nationals, the week here started off pretty well and our consistent results helped us out to secure our final ranking when we had three to four bad races, with two of them today, which were discards. But we were able to pull it back in the last race. I’m very excited and happy we will be going to the Youth World’s as I have been looking to go for a while and it’s fantastic to get the opportunity to go this year.”

Having been part of the Australian Sailing Youth Sailing Team last year, seventeen-year-old Lachlan Gilmour will be one of the veterans on the team:

“We knew it would be a good challenge coming over here and race the Queenslanders and Victorians. We were quite happy where we finished and it will be great to go to the Youth World’s. There’s a lot of work to be done before then, in the gym and we are also planning to do an invitational practice regatta in Japan as well as the National Training Camp.”

The Australian Sailing Youth Team will be endorsed by the Yachting Australia Board at the beginning of February and will prepare at their individual home locations as well as in a joint training camp at Royal Queensland Yacht Squadron in Brisbane just prior to Sail Brisbane in April. The Laser Radial and 420 boys and girls will be the guests of the Japan Sailing Federation in the annual Australia/Japan Youth Sailing Exchange in March. This will be the third year of this exchange which is highly valued by both countries.