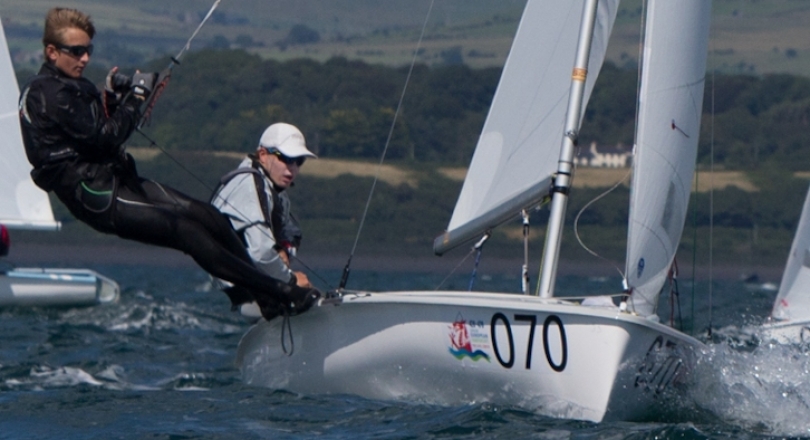 The biggest entry in recent years saw 70 boats at the RacingDinghies 420 National Championships in Pwllheli from 10-13 August 2013.

Whilst numbers were boosted by some overseas competitors training for the Junior Europeans which follows this event, it was great to see so many new sailors entering the Class.

Saturday dawned to dull skies and light winds but as the wind picked up the fleet launched with the prospect of three races ahead. The increased entry meant that a flighted fleet racing format was required – fantastic!. Yellow fleet led the way and as ever with the sailors keen the start, Adrian Stoggall’s dulcet tones could be heard on the start line shouting offending bow numbers and a general recall ensued. The sight of a fluttering Black flag brought them all back into line and racing got underway. The first yellow fleet win went to Harel Yadid and Itai Lampracht of Israel who took the first gun of the event. Blue fleet followed closely behind and Xavier Winston Smith and Joshua Dawson of Australia took the win. Race two and three saw the GBR sailors start to show their skills with Yellow race 2 being won by Tim Riley and Luke Burywood and race 3 by James Taylor and Tom Lovesey, with Annabel Cattermole, the newly crowned Ladies World Championship helm and Charlie Cox winning races 2 &3 in the Blue fleet.

On Sunday, following Saturday’s Hog Roast and flight reassignment, further flighted fleet racing was planned, in a building breeze that eventually saw the “O” flag flying. James and Tom carried on from where they left off with another race win in Yellow race 4 with Taylor Burns and Henry Gibbs of New Zealand taking their first win in Blue race 4. As the breeze picked up Callum Airlie and Joe Butterworth showed a clean pair of heels to win Yellow race 5 with Xavier and Joshua picking up a 2nd win in the Blue fleet. With the black flag flying on both fleets starts, race 6 saw Stog call his first BFD of the event, unfortunately for him it was his daughter Ella, so he was cooking the dinner later!! Yellow race 6 saw new winners in Yahil Wallach and Stav Brakman, of Israel, in Yellow and Ben Hazledine and Rhos Hawes in Blue.

After the gold and silver fleet flights were posted on day 3, the fresh faced sailors formed an orderly queue to tally out with their trackers. Little did they know that four races were ahead of them. Silver fleet led the way with the win going to Jo Kalderon and Midge Watkins with Annabel and Charlie getting a bullet in the Gold fleet. In race 8, the Austrian team of Hubert Kern and Luis Wenger-Oehn took the silver fleet win and Tim and Luke won Gold. Race 9 saw wins for Americans Cooper Yeager and Robert Gordon in Silver and Annabel and Charlie in Gold. With fantastic sailing conditions, Stog decided to run a 4th race. Silver fleet race 10 winners Sarah Jarman were certainly happy with this and they crossed the line with big smiles. Meanwhile Craig Dibb and Molly Frost took their first Gold fleet win of the event.

The final day dawned to fair winds and more close racing. This time with Gold starting first, Race 11 saw James and Tom take a 3rd win and Katie Davies and Issy Fitzgerald took their first win in the Silver fleet. Gold fleet race 12 had two black flag starts which resulted in 5 boats having a bad day but again Israel came to the front with Dolev Isaak and Nitai Hassan taking the bullet and Jenny Smallwood and Esther Fenton Jones leading the silver fleet home. With the Black Tie dinner beckoning Stog decided to run one final race which saw a win for another Israeli pair Tal Harari and Omer Ben with a 2nd silver fleet win for Jo and Midge.

The Class would like to thank Pwllheli Sailing Club for hosting the event and Racingdinghies as sponsor for providing some fantastic prizes.