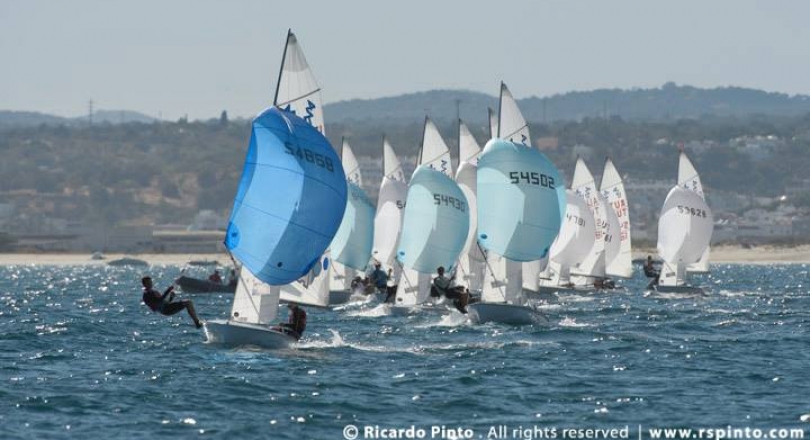 A lack of wind brings a disappointing end to a fantastic week of competitive sailing here in Tavira, were the youth champions of Europe have been crowned and awarded their medals and trophies.

Having enjoyed such a fantastic week of good winds and sunshine, the wind really let us down on this the last day of competition, although we still had the sunshine to enjoy. The medal races had been scheduled to start at 12.00, but there was not even 1 knot of wind at the designated time, so postponement was followed by postponement. Patience is a virtue learned by sailors at a young age, and waiting for the wind is as much part of the sport as revelling in a strong breeze.

As time passed by the Race Committee had no option but to cancel each discipline in turn, always hoping a breeze would develop, sufficient to race one or two of the classes, but this was not to be. So, the final results are those at the end of the 12 fleet races, which concluded on 8 August..

Victory in the highly sought after Nations’ Cup, Team Trophy goes to France this year, with the winner from last year, Italy, in second place and Spain third, beating the German team by just one point.

What had been a very successful week teetered to a holt in disappointing fashion, but all the medallists were worthy winners, who coped with some variable conditions throughout the week, in order to take their reward. We now look forward to 2014, when the EUROSAF Youth Sailing, European Championship will be sailed in Gdynia, Poland at the beginning of August.

Thank you to Tavira and Portugal, you have done us proud and thank you to all the sailors, coaches and volunteers who have made this such a splendid championship.