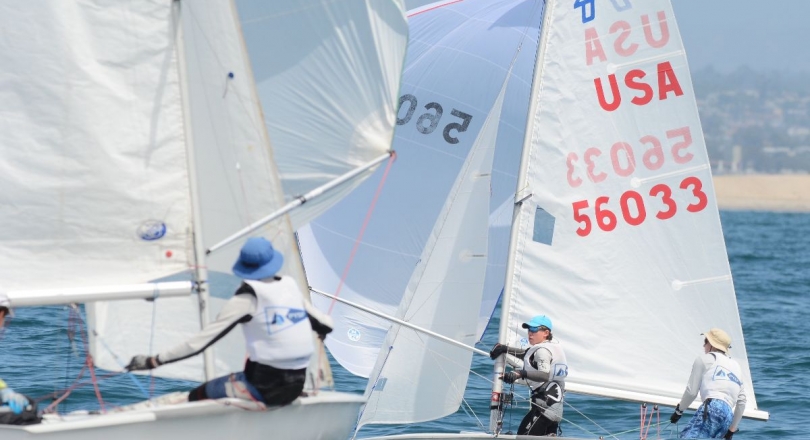 2019 marks the second year the 420 Class has joined the line-up of Olympic and International Classes for the San Diego Olympic Classes Regatta, 6-8 September, hosted by San Diego Yacht Club.

The event is hosted as part of the build-up to the 2024 Olympic Games which will be hosted in Los Angeles.

Nine 420 Class teams took to the race track, with Gray Hemans/Michael Fineman claiming the win on an 8 point scorecard, finishing with a 1 point advantage over Sophia Devling/Alexandria Stauffer. Third to Kyra Phelan/Sophia Browne.

“In the last race, the pressure started to develop a little more to the left, so that’s where we went. We were able to gain and make space between the other boats, staying in third for the rest of the race,” explained Hemans. Hemans' and Fineman’s goal is to win the Triple Crown Series this year.

Over 100 sailors in seven class fleets were in San Diego for the weekend at the 2nd annual San Diego Olympic Classes Regatta. Skippers and crews of all different skill levels sailed on their designated Pacific Ocean course.

JJ Fetter, a two-time Olympic medalist - bronze at the 1992 Barcelona Olympics and Silver at the 2000 Sydney Games - in the 470 Class, was one of the many that were assisting Chair Susi Graff in making the regatta such a success. Fetter explained the importnace for sailors to gain this type of experience, saying, “Events like this create a path to becoming a life-long sailor. You see these kids learn about preparing their boats, using tools, tuning, adjusting, and developing friendships with sailors in other classes. You never know what spark is going to make someone become passionate about the sport.”

About the San Diego Olympic Classes Regatta
With an eye towards the Los Angeles Olympic Games in 2028, the second annual San Diego Olympic Classes Regatta will provide a venue for sailors to train and compete in international, high-performance classes. This regatta is an annual event, growing in scale as we get closer to 2028. San Diego's long history of Olympic sailing achievement will hopefully inspire sailors to participate and perhaps reach for the pinnacle of success in our sport.