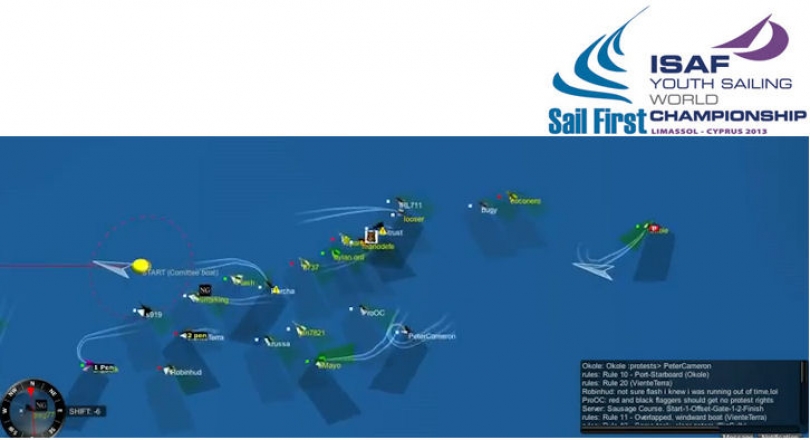 For the second year in a row, the award-winning sailboat racing simulator SailX.com will be running the “Virtual ISAF Youth Sailing World Championships”.

After last year's successful collaboration with ISAF and the team in Dublin, this year's virtual event will take place from 20 May – 30 June 2013, to provide a fun and beneficial build-up to the main regatta to be held in Limassol, Cyprus from 13– 20 July.

Unlike the real-world competition where spaces are naturally limited to the few that qualify and can afford to attend, the virtual event is open to every sailor that may want to take part – even including non-youth sailors in fact, who will have a separate ranking.

In this innovative competition ISAF Youth Worlds competitors will battle against some of the smartest minds in inshore sailboat racing, including top-level coaches and sailors, sharpening their mental game and readying themselves for battle in the real world as they do so. With mental performance being such a vitally important aspect of inshore sailboat racing, the use of simulation has now become a core part of a sailor’s training - as much as it has become so for pilots, medics, soldiers, etc.

Results will be categorised by age and the winning individual in the 'Youth' classification will be awarded with the 'ISAF Youth Virtual Sailing World Championships Trophy'.

Yiannos Photiou, Chairman of the Organizing Committee, commented, "The SailX racing environment and social tools will help us bring the young sailors who are coming to Cyprus together before July, plus it will also help us engage many more sailors young and old from all over the world. Hopefully we will be able to make them feel part of this great event."

SailX creator Amando Estela commented, "It will be fascinating to watch the top youth sailing talent from all over the world battle it out. Of course no simulation could never test all of the skills involved in sailing, but this “Virtual Youth Worlds’ will quickly show us those competitors who really understand racing strategy and rules – both vital areas for success in our sport. More important however, I’m 100% sure that SailX will help every competitor to emerge ‘hot’ and ready to race in Cyprus come July!"

About SailX.com
SailX is a high-quality online simulation that enables people from all over the world to race virtual (strict one-design) sailboats against each other in real-time in a fully moderated environment and in strict accordance with ISAF Racing Rules of Sailing.

Racing is simulated very accurately on SailX but with one significant tweak – everything happens at about five-times normal speed! This means the game is fast, furious and great fun - with each race taking only 7-9 minutes depending on the wind – and importantly the racing provides many more ‘mental game’ learning opportunities than the real world.

The result is a game for players of all ages and skill-levels. For kids and complete beginners, it's fun to sail different boats and courses and to interact with people from all over the world. For schools and federations SailX is a fun way to teach decision-making and responsibility and a way to use (inevitable) gaming time to push a healthy sport. For advanced players & sailors, SailX offers unlimited depth, complexity and sporting relevance - to the extent that top-level sailors and coaches actually use it to improve their real-world racing.

SailX is now the leading inshore sailboat racing simulation environment in the world (by far). The SailX community is made up of over 32,000 users from over 100 countries worldwide. On average SailX hosts a 12-person race every 5 minutes, 24hrs a day, every day. That's over 100,000 races and 1,200,000 individual finishers every year – and over 100 years worth of racing since SailX started!

SailX has a searchable database over 18,000 ruled protests complete with incident videos and community commentary.