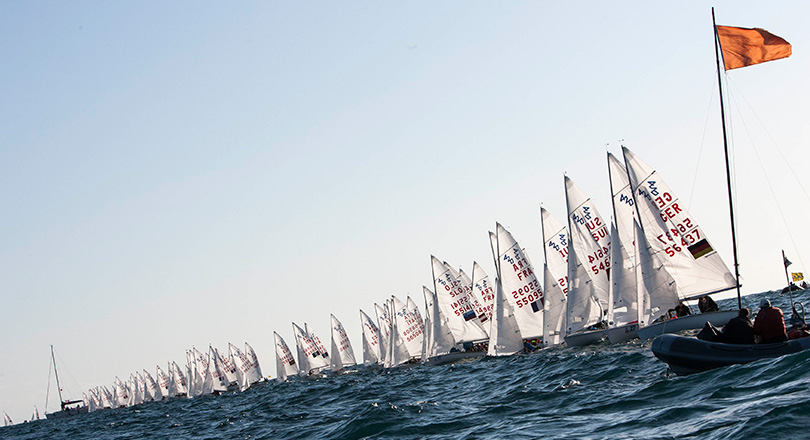 Kiel Week sets a sign and prepares for the 2020 edition

After the virus lockdown and with the main focus on health, the Kieler Woche's 2020 edition is facing enormous challenges and preparing various changes to receive the competitors.

Maximum number of registrations in all classes. Concentration on the classes that have contributed to the success of Kiel Week in the past years. Flexibility in dealing with registrations and cancellations. No late entry fee. Wednesday as a full changing day between the Kiel Week halves without races and creative ideas for Offshore sailing - Kiel Week (September 5th to 13th) is setting a sign and has one main goal for 2020: to offer sailing regattas. The result: many classes have reached the maximum number of registrations and the waiting lists are filling up. The sailors are voting with their feet and are looking forward to Kiel.

"These are enormous challenges that we are facing in order to give the sailors the opportunity to sail regattas again this year. The health of everyone involved is clearly the main focus, so our concept will have to be adapted again and again. All planning - for example with regard to the number of participants - is adjusted to the Corona restrictions currently in place until August. Hygiene regulations and minimum distance rules would have to be observed. But we will offer the sailors the opportunity to compete in the Kiel Week. We receive so much encouragement and feel that many sailors are counting on Kiel Week", says Organisation Manager Dirk Ramhorst.

As the regattas are held without spectators on land, even more emphasis is placed on digital public relations. "We will expand the work in the social networks and make the regattas accessible to sailing fans via Kiel Week TV", adds Ramhorst. In this way the Kiel Week is to be experienced virtually worldwide. The state capital Kiel will be responsible for the TV area in 2020 and will bear the costs. In this way, the state capital is underlining its responsibility for the sport of sailing and relieving the financial burden on the organising clubs.

"This will be a different Kiel Week than usual. But it will be sailing," says the organisation manager. As the total number of people in the event area in the harbour in Schilksee is limited to around 1000, the area has to be cordoned off. The active participants are among themselves with trainers and organizers. Event tents, the Sponsors' Mile and sales stands will not be present. The regatta house, the boot-Düsseldorf-Club as a check-in tent and the Vaasahalle are the cornerstones on land, which may be extended by the KYC boat hall in Strande.

On the water up to six lanes per Kiel Week half are planned. Even if the course distribution and the maximum number of entries are roughly in place, adjustments are still possible, which may result in particular from a possible cancellation of the keelboat classes due to the existing regulation. Already at Whitsun it became apparent that many athletes from all over the world would like to take the chance to compete in Kiel. The Olympic classes 49er, 49er FX, Laser Radial, Laser Radial Standard and Nacra 17 as well as the junior classes 29er, 420er, Laser 4.7 and Laser open have waiting lists.

In order to avoid an overcrowded harbour when changing the classes of the Kiel Week part 1 and 2, Wednesday will be completely rescheduled to a change day. After the regattas on Tuesday, September 8th, until Wednesday, September 9th, at 11 a.m. the classes/participants of the first half have to leave Schilksee, from Wednesday, September 9th, at 12 a.m. the participants of the second half are allowed to enter the harbour area. "We assume that the active participants have understanding for our procedure. Only in this way can we guarantee compliance with the Corona regulations and thus guarantee the regattas," said Ramhorst.

The days from Saturday to Tuesday are reserved for the classes of the first part and those from Thursday to Sunday for the classes of the second part. "We will therefore also dispense with the medal races in the Olympic classes and offer all starters four full days of sailing in the second half", explains Ramhorst. Access to the habour for training will not be available for the starters in the second half.
Whether Offshore sailing will be possible during Kiel Week 2020 will be decided in mid-July, as the federal state of Schleswig-Holstein will probably announce new regulations in early July. The Fareast 28R, whose world championship takes place in August in Laboe, were cancelled, while the VXOne were postponed to 2021.

The Kiel Week is still in discussion with the 470s, which the DSV would like to see at the starting line. There are also inquiries about championships of the 29ers (Eurocup), Musto Skiff (German Open) and the Lasern (German Junior Championship). "For this we would have to adjust the previous maximum entry numbers in these classes. We are in discussion with the classes and will react flexibly", says the Chief Race Director Fabian Bach. In order to keep the registration modalities as simple as possible, there will be no late entry fee. The Early Entry Fee expires on July 1st. "Anyone who wants to sail will register quickly anyway. Because whoever registers first will be there," says Dirk Ramhorst. There will also be a waiting list, and if classes are cancelled, other fields can be extended.

"We have calculated the number of participants based on the registrations of the previous year", says Sven Christensen, Managing Director of the marketing agency Point of Sailing, knowing full well that one or two classes are unlikely to reach their class goal and that there will be chances for the successors in the remaining classes. There are also three more classes in the waiting loop.

The new tender/notice of race is now available on the net at: www.manage2sail.de and www.kieler-woche.de