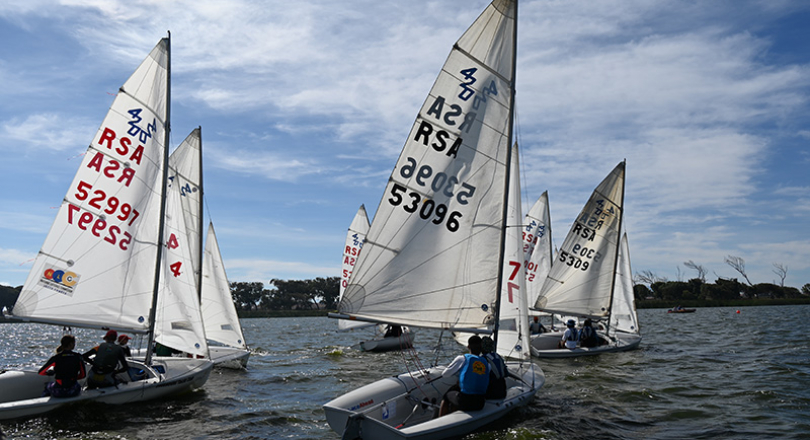 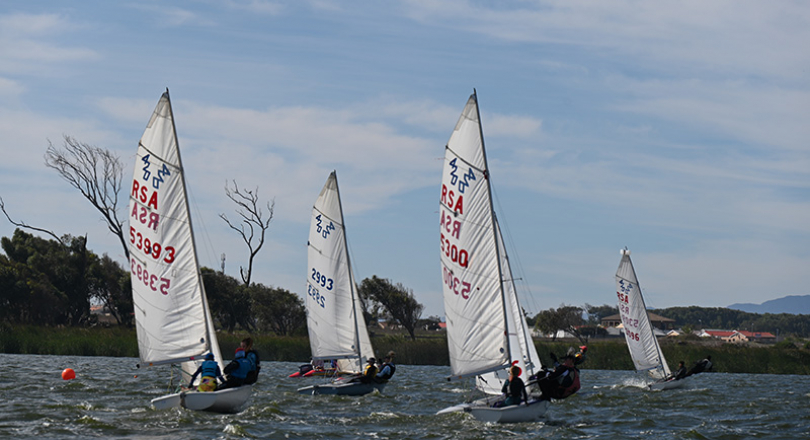 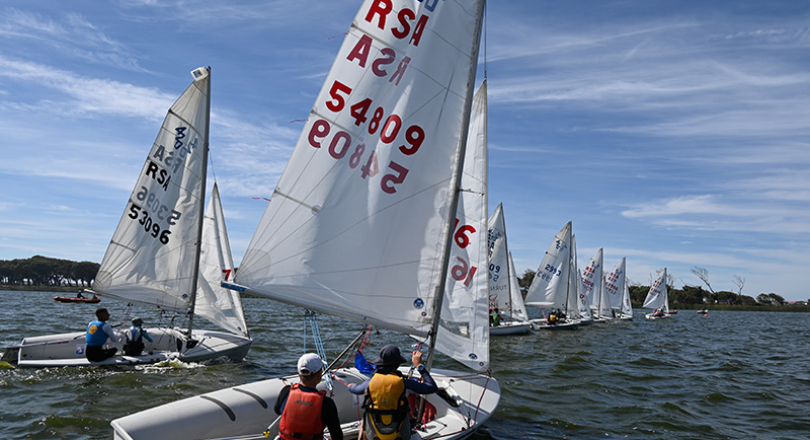 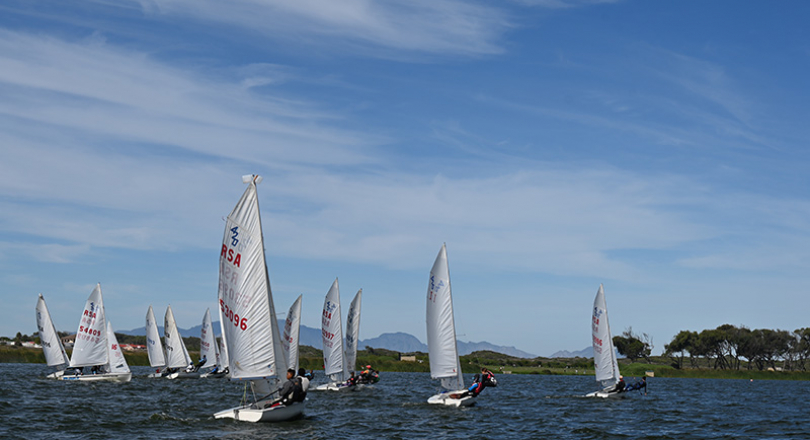 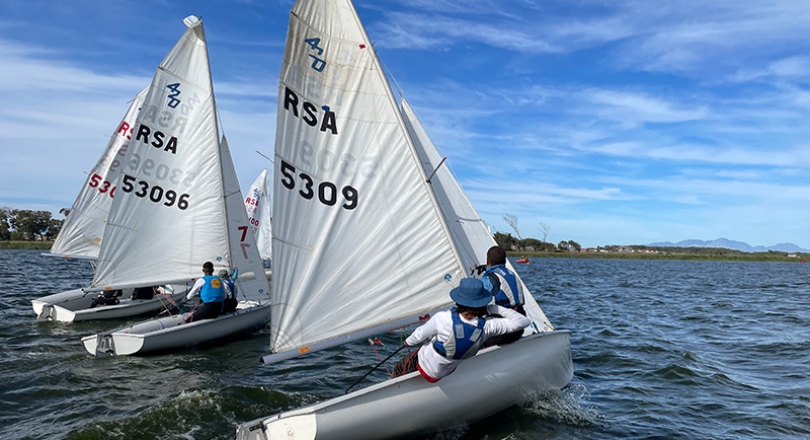 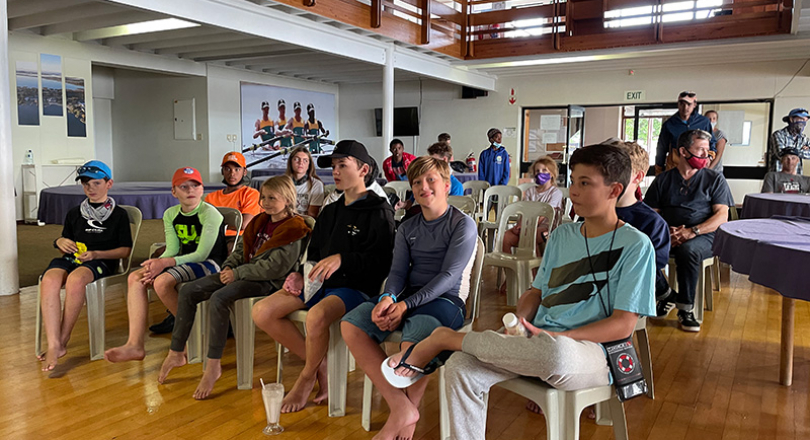 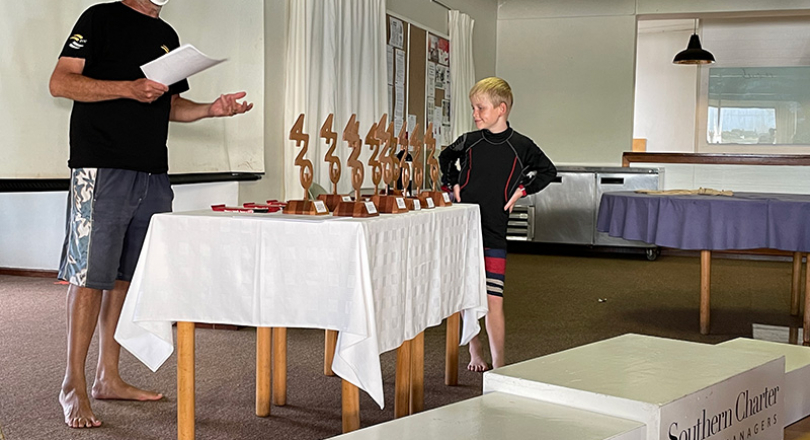 Mr. Stefan Falcon was the main promoter of this great initiative and here’s his report from RSA;

On Sunday 11th April we run a Masters & Apprentices Regatta at ZVYC In Cape Town.

ZVYC is the home club for 420s in South Africa, being the club that introduced the class in the country.

The club also runs a successful Optimist training programme, and quite a few notable South African Optimist sailors have come through the ZVYC programme.

The Optimist sailing programme is quite intense, and when finally sailors age out, some of them have not really made a plan on what to sail next.

By organizing a 420 Club Regatta for these sailors we wanted to offer them the possibility to try a boat that they could transition to in the future.

We chose a relatively free weekend at the end of the sailing season, when the wind is also not too strong anymore and we ran a 5 races, one discard regatta.

Each team had to be made up by an experienced 420 sailor (the Master) and a 420 Novice (the Apprentice). An Apprentice may not have sailed a 420 National or Provincial championship yet. If he/she has sailed a National championship that sailor will be considered a Master. There is no rule on who helms and who crews, and the two sailors are allowed to switch as often as they wish.

To avoid lengthy protest hearings after the day of racing, we also introduced on the water umpiring. Emulating a little what has been done in the last America’s Cup, we had two Judges on the water, and protests had to be lodged at their RIBS. The Umpire then had a few minutes available to dispense his/her ruling before the next start. A two turn penalty had to be served during the first beat of the race following the race where the incident occurred. If the incident occurred in the last race, a 2 places penalty would be served. No redresses, no protests on shore.

As it turned out, racing was reasonably fair and the umpires had less work than originally expected.

The Master that were summoned to chaperone the Apprentices answered readily to the call and made their time and boats available for the event, and we had 15 boats compete in all 5 races.

With the regatta being aimed at introducing new sailors to a new boat, I thought it would have been more of a cruise rather than proper racing. I was wrong. De Coubertin would have had a hard time trying to convince this lot that “The most important thing is not winning but taking part ”.

Some teams had been training already from the previous weeks, with sights set on a podium finish, while some of the Masters went scouting for the most eligible Apprentices while studying the weather forecasts.
It got intense before it started.

On the day prior to the regatta we had a technical briefing on land. Apprentices received a demonstration and explanation on how to trapeze, set and drop the spinnaker and jibe.

In line with Covid regulations we held our skipper’s meeting the evening of Saturday 10th via Zoom and we kept all event communications digital. No physical notice board was used. We only posted info on the event whatsapp group where also the results were posted a few minutes after each race was completed. We had tried this format at the 2020 Nationals already and we will keep on using it in the future.

At the beginning steering and manouvres were a little shakier for some teams, but towards the 5th race all operations had smoothened out a lot.

There were some General and Individual recalls after the starts, a clear sign that things became competitive quite quickly.

As racing progressed, the teams that found themselves at the top of the scoreboard were the teams that had the most successful Masters at National level. The first three teams all had a Master that consistently finishes in the top 3 at National events. Just outside the podium, in 4th place, Isabella Keytel and Max Cilliers, two of the top Optimist sailors in the country, fought hard to bring home some silverware, but had to concede to the three more experienced 420 sailors.

The first two teams both had one half of the 2018 and 2020 National Champion Team. Ross Mackinnon helmed for Apprentice Hayden Phylander to get 2nd place, while his usual bowman Alex Falcon crewed for Blake Madel to win the event.

It is only fitting that Madel-Falcon won over Mackinnon-Phylander by one point after discard after the last race. In the past 3 years Mackinnon-Falcon have traditionally won (or lost) major regattas by one point, or sometimes on equal points with their direct opponents.

The lack of protests or redress requests ensured that the prizegiving could take place right after racing was concluded, prizes were handed to the first 3 teams and other meritorious sailors.

The event was well received by all involved and we will definitely repeat it next year, the deed is written already.