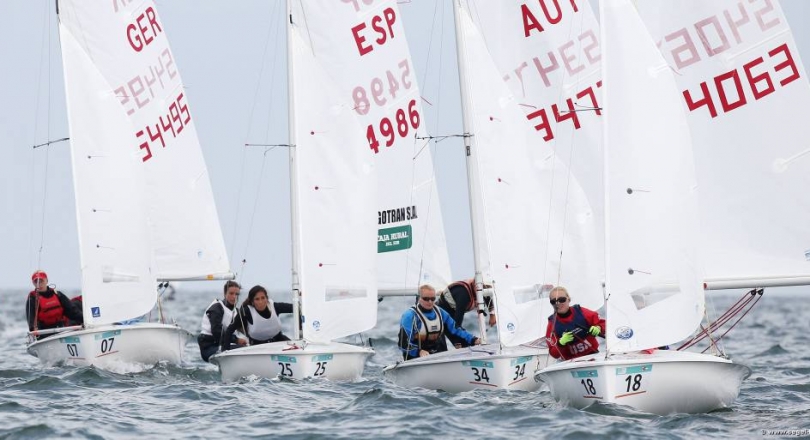 Qualification Series Wraps up at 420 Worlds - Singapore and Spain Lead

Racing got underway on day 3 in a 12-15 knot breeze from the north, perfect conditions to complete the final two races of the 6 race qualification series.

This news belongs to
2014 420 World and Ladies World Championships
ALL EVENT INFORMATION
Lay day on Thursday, then onto Gold and Silver fleet racing for the 6 race final series on Friday 1 August

With the discard kicking in after race 5, some shuffling on the leaderboard as teams discarded their worst score in the 420 Open and 420 Ladies fleets.

The lay day on Thursday 31 July gives teams a chance to enjoy the party tonight at the Championship venue, with boat work, sight seeing and relaxing on the agenda for tomorrow.

Spain continues to hold the top overall nation slot, with five teams in the top 10 across both the 420 Open and 420 Ladies fleets, putting themselves in a good position to retain the Francis Mouvet Trophy they have held since 2012.

420 OPEN
A win in race 5, briefly handed the overall lead to Portugal's Diogo Pereira/Manuel Macedo in the 420 Open fleet, as overnight leaders Adrian Domminguez/Calixto Abalo (ESP) scored a 32, their worst result so far, and dropped down to 5th.

But the discard after race 5 soon changed the leader board again, and a new team surfaced at the front in the shape of Jose Manuel Ruiz/Fernando Davila (ESP) who  finished 2nd in race 6 and jumped up to take the lead by 6 points.  Team mates Dominguez/Abalo were back on form to claim a sixth place finish in race 6 and end the qualification series in second overall. ISAF Youth World gold medallists Jia Yi Loh/Jonathan Yeo from Singapore are in third, after recovering from a now discarded 31st in race 5.

Pereira/Macedo held on to their place within the top ten and move through to the final series in 6th overall.

Of the twenty-seven nations competing in the 420 Open fleet, twenty-two have teams advancing through to Gold fleet for the final series.

The Greek pair enjoyed a massive leap up the leaderboard after their disqualification in race 2 saw them well down in the pack, but with that now discarded from their results they count an all top-10 scoreline. But, their race 2 result will still haunt them, as the teams around them count all top ten results, the pair have no margin for more double digit scores.  Another new team moving into the top 10 are Germany’s Theres Dahnke/Birte Winkel who finished with a 3,4 today.

A close outcome for  Germany’s Silke Hahlbrock/Juliane Zepp who were the final team to complete the gold fleet line-up on tiebreak over Theresa Loeffler/Theresa Heilingbrunner, with both teams on an equal 97 points.

Of the 21 nations competing in the eighty-four boat 420 Ladies fleet, 14 are represented in the Gold fleet. With all the top teams now racing against each other, the game plans and race tactics are likely to unfold  just a bit differently as the competition intensifies over the final 6 races.

Racing Schedule for Friday 1 August
A reserve day on Thursday, ahead of the final series getting underway on Friday 1 August 2014. Two races for each fleet on Friday with the Gold fleets starting first, followed by Silver.

ISAF Youth World Gold Medallists Silvia Mas/Marta Davis from Spain asserted their authority on race day 1, but today it was all change as rivals Kimberly Lim/Savannah Siew (SIN) took over the race track and won races 3 and 4 in defining style.
The 420 Ladies yellow fleet fielded some of the closest matched teams as the top three in the yellow fleet find themselves dominating the overall leaderboard.
Singapore’s Lim is thrilled to be racing against rival Mas in the qualifying series, particularly as their friendship goes back long before the 420 to Optimist days.
“We have been really close to the Spanish girls over the past couple of years,” said Lim. “We have been at so many World Championships together and I have known Silvia since Optimists. It has been a long time. We have trained together and if tuning is not going right we ask each other. Having friends from overseas is really, really helpful. We have a close friendship, but compete really hard on the water, that’s for sure.“
Their pre-race game plan was the key to success, as Siew explained. “We had our race planned before our starts. Both races were quite similar, so after our first race success we just followed the same plan and it worked out for us. Boat speed was quite important today as it was really choppy.”
“We did really well in the sense that we communicated during the race and after and we fed back to each other,” continued Siew. “These are not conditions we are used to, so we have to talk a lot.”
A repeat procession behind the Singapore team, as Italy’s Carlotta Omari/Francesca Russo Cirillo finished in 2nd place in each race and Spain’s Silvia Mas/Marta Davis claimed two third places.
In the 420 Ladies blue fleet, wins to Elena Picotti/Maria Coluzzi (ITA) and Carmen Davila/Julia Davila (ESP),  who both move up within in the leaderboard top ten.
Asian prowess continues at the front of the fleet, with  Malaysia’s Nuraisyah Jamil/Umi Nurwahida Sallehuddin moving up to 6th overall from their 7,2 results.
Early days, but don’t miss the four Spanish teams in the top ten which is testament to the nation’s pedigree in the 420 and puts them well on target to retain the Francis Mouvet Trophy as top overall nation.

Go to the CHAMPIONSHIP WEBSITE for all news, photos, information and live race updates ...
Visit