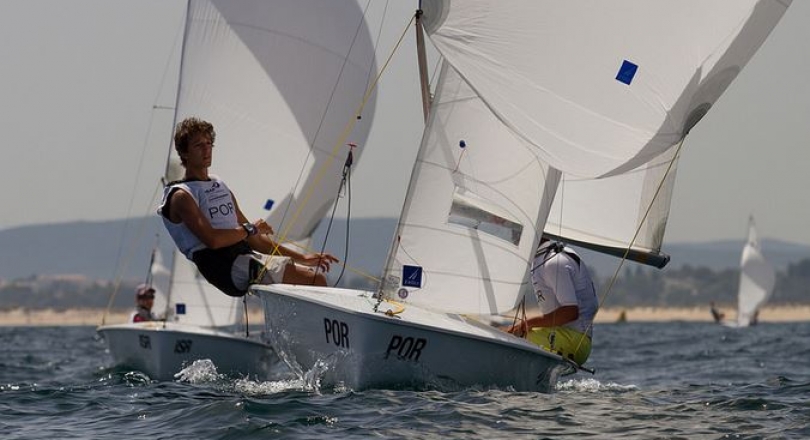 Historically the ISAF Youth Worlds has seen French, Italian and British teams dominate proceedings but in a light westerly breeze, sailors from Slovenia, South Africa, Portugal and Argentina shone brightest in their fleets.

Frustrations were afoot early on in the Portuguese day with light winds present on-shore but after a slight postponement six of the eight fleets took to the water to complete their racing schedule.

Portugal's Diogo Pereira and Manuel Macedo threw themselves into 420 Boys lead after dominating the 32-boat fleet on home waters on the third day of racing.

Pereira, a 2013 bronze medallist, and Macedo controlled the pack in both of the day's races, storming to double bullets that leaves them first overall going into the penultimate day. They are four points clear of overnight leaders Ibuki Koizumi and Kotaro Matsuo (JPN) and a further three ahead of Malaysia's Mohammad Faizal Norizan and Ahmad Syukri Abdul Aziz

After racing a delighted Macedo said, "It was brilliant, we got two bullets. Nothing better could have happened. We got clean starts and had our tactics defined. We had good speed and did what we do best. We're feeling great leading the table and let's hope we can keep it up until the end of the championship."

The pair are Portugal's leading stars at their home championship and realise how key the event is to them, "It's really important. There's a slight bit of pressure but we can keep it up because we are good sailors and we'll do the best we can.

"We struggled a little bit before but we managed to get the difficulties behind us today with two first places," concluded Macedo.

In the 27-boat 420 Girls fleet Spain's Silvia Mas and Marta Davila remained consistent on the race course once again and with a second and a first they regain top spot.

Germany's Theres Dahnke and Birte Winkel held the overnight lead but a sixth and a discarded 12th allowed the Spanish pair to move 10 points clear.

After racing a chirpy Winkel said, "Today was a really difficult day because there was no wind. It was a really long hard day. We're really happy though because that type of wind is not our best and we're at the top.

"I love this event, it's my first time and it's just amazing. It's like an Olympic Games for us."

With two days of racing remaining there are three more races scheduled across the 420 Boys and Girls fleets.