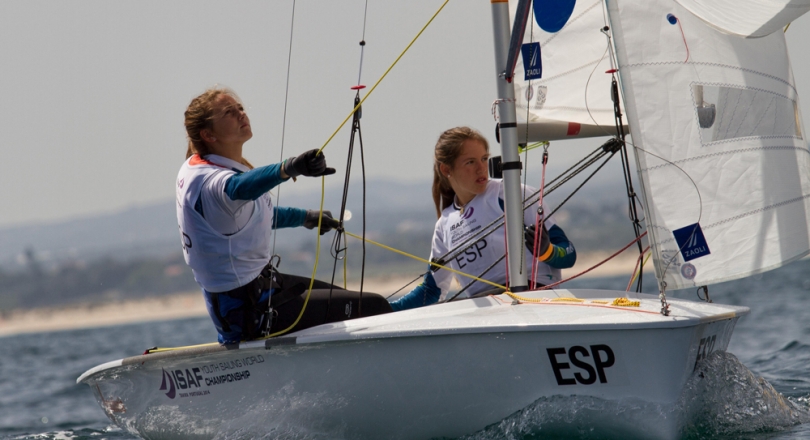 Spain's Silvia Mas Depares and Marta Davila Mateu clinched 420 Girls gold with a race to spare on the penultimate day of racing at the 2014 ISAF Youth Sailing World Championship.

he Spanish team have been sensational on the water and sealed the deal with a bullet and a sixth.

Many of the sailors across the remaining seven fleets have guaranteed themselves a medal but the colours are to be decided on the final day with one race on the cards for each fleet.

Tavira's breeze arrived fashionably late but when it came in it remained consistent from the south west building to 10-12 knots.

Spain's Silvia Mas Depares and Marta Davila Mateu wrapped up gold in the 420 Girls fleet after a dominant display on the penultimate day.

A bullet and a sixth leaves them with an unassailable 13 point lead over the chasing pack and they were delighted after racing, "Every sailor always dreams about winning a World Championship and this is awesome for us," said Mas.

A beaming Davila added, "Just being here is amazing but winning it, it's unbelievable. We've won an ISAF Youth Worlds!"

Israel's Yahel Wallach and Stav Brokman have had a strong two days of racing and with a race to go they have sealed silver.

The race is on for bronze with any of the teams placed from third to eighth mathematically able to win gold. As it stands Theres Dhnke and Birte Winkel (GER) hold third spot.

It's a different outlook in the 420 Boys fleet with five points separating the top four. The lead has exchanged hands numerous times throughout the week but heading into final day in pole position is Japan's Ibuki Koizumi and Kotaro Matsuo.

Many of the teams struggled for consistency on the penultimate day but Singapore's Yia Jia Loh and Jonathan Yeo found some form and posted a first and a sixth to advance into silver medal position.