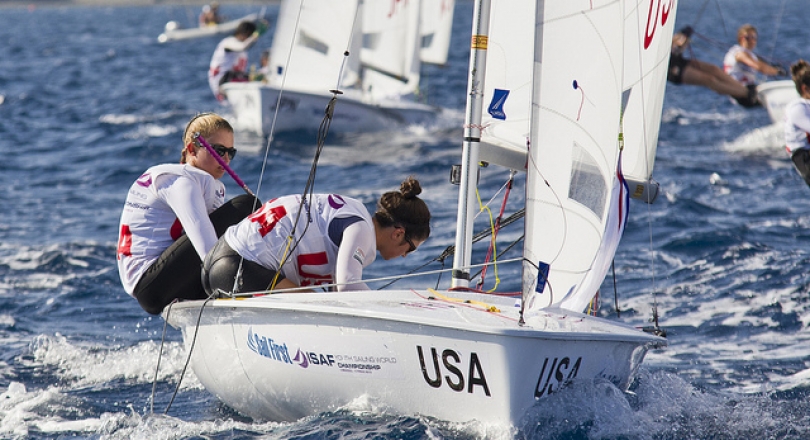 Over 350 from 61 nations took to the water on the opening day of the Sail First ISAF Youth Worlds as a full complement of racing across eight events in five classes was completed.

The 31 strong 420 Boys fleet finished their day in the early afternoon and showing the most consistency in the day was the Portuguese team of Diogo Pereira and Pedro Cruz and Japan's Ibuki Koizumi and Tsubasa Arioka. Both teams recorded a second and a fourth to hold the advantage whilst the race wins went to Brazil's Tiago Brito and Andrei Knepp and Spain's Pedro Martinez and Luis Bugallo who are third and fourth respectively.

Australia's Carrie Smith and Ella Clark showed the 27 boat fleet that they are here to win the 420 Girls title having recorded a 2-1-5 scoreline. They lead Kimberly Lim and Savannah Siew (SIN) by two points. Defending champions Ilaria Paternoster and Benedetta Di Salle (ITA) secured two race wins but a black flag in Race 2 subsequently puts them down in 11th. With the discard coming in after five races they will work their way back up with steady results but will now sail cautiously.

Racing resumes on Tuesday 16 July across the eight classes at 12:00 local time.