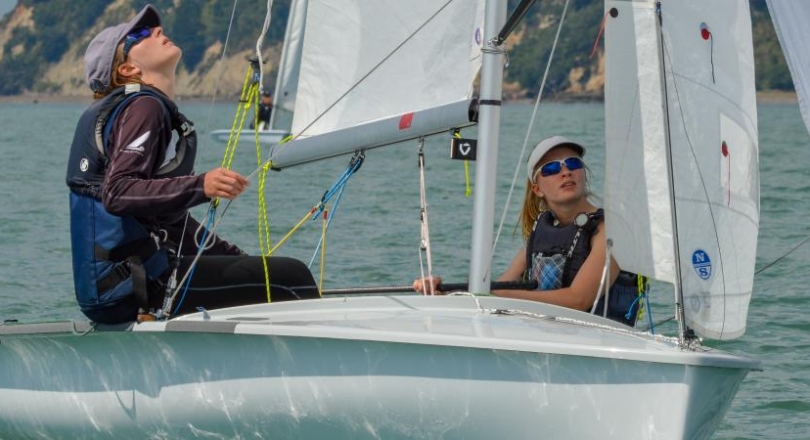 THE JOURNEY TO THE YOUTH WORLDS FOR NEW ZEALAND'S 420 WOMEN

This is a story of planes, trains and automobiles – and boats – a story of one youngster’s commitment to sailing.

Sydney Cunliffe lives in Taupo and every Friday night since February she has ventured north to Auckland to train with her 420 partner Rebecca Hume.

Sometimes she flies, sometimes she is driven by her parents and sometimes she jumps on a bus just so she can get two days on the water. And then Cunliffe makes the return journey, often on Monday morning when she goes directly to school.

It’s a sacrifice worth making for Cunliffe, who in February won selection with Hume to compete for the NZL Sailing Foundation Youth Team at this month’s youth sailing world championships in Gdynia.

It will be the pair’s first international regatta together after they first teamed up at last year’s Junior Sail Auckland regatta. They had never met each other before the regatta but something clicked.

“I really wanted to do double-handed sailing but struggled to find a partner,” Cunliffe said. “It’s hard being in Taupo. I tried to find someone in Auckland who was happy to sail together only on weekends. I ended up doing Starlings for a season just to keep sailing and competing. Then I found Rebecca.

“I had been asking around. Some of my friends were doing 420 already so I asked them to get the word out and Rebecca got mentioned.”

The Humes have become something like a second family for Cunliffe, dossing at their place near the Kohimarama Yacht Club each weekend. She’s also in her final year of high school at Tauhara College and needs to keep on top of school work, which is made even more complicated by the fact she also works part-time in a McDonald’s restaurant.

Cunliffe intends moving to Auckland next year to study architecture at university, which should also make it easier to go sailing.

It’s a sport the 17-year-old rather fell into by accident. Her older brother liked the look of sailing, and read countless books on the subject, and when he asked to sail in the holidays Sydney was taken along.

“I was too young to stay at home by myself so I got dragged along and got put on a RIB,” she explained. “The next thing I know I’m in an Opti and ended up liking it lots. The Lake Taupo Yacht Club is a fun yacht club and on Saturdays we used to sail over to the sailing centre to get ice-creams.

“I felt like I really wanted to do more and my parents said there were some competitions so I started sailing at the North Island champs in green fleet. It went surprisingly well. I was first girl. I was really surprised by my results because I hadn’t done any competitions before. A result like that made me want to do it even more.”

Cunliffe says she’s largely self-taught but occasionally went over to Tauranga to train with Maria Ferrario, who has coached youngsters to world Optimist titles. She was selected for a New Zealand squad to compete at the 2017 Asian Optimist championships, finishing as the second girl from Oceania.

The youth sailing world championships will be an entirely different proposition and Cunliffe is unsure of what to expect at Gdynia.

Cunliffe probably knows every corner on the road between Taupo and Auckland but she will be the first to admit it has been worth it.