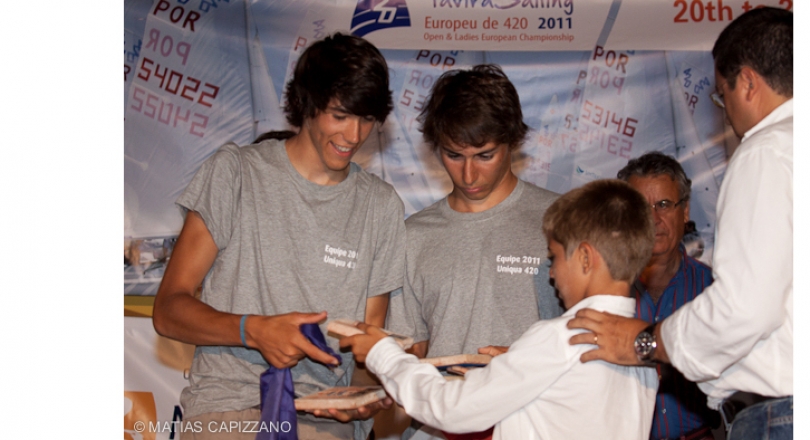 The 2012 French 420 Nationals, known as the Coupe Nationale, were contested from 14-19 July 2012 at Trebeurden in Brittany, northern France.

A great outcome for Clovis Leroux/Aymeric Paruit ahead of the 420 Worlds, where amongst the other competition they will face their team mates and silver medallists at the Four Star Pizza ISAF Youth World Championship Guillaume Pirouelle/Valentin Sipan. Also contesting the 420 Worlds will be many of the other teams from the ISAF Youths, who are heading straight over to Austria.

Three race wins was more than enough to deliver the outcome for Leroux/Paruit, who finished the championship with a 17 point margin over the second placed Thomas Ponthieu/Valentino Di Salvia (FRA).

Rounding out the top three were Reiner van Duk Erenkema/Spencer MacDonough from the United States, who finished on 57 points and just 2 points behind the silver medallists.

Another great results for Great Britain’s Jessica Lavery/Georgie Mothersele who were the top placed girls’ team in ninth overall. Will be interesting to see how they match up against their team mates Annabel Vose/Kirstie Urwin, who just won the bronze medal at the ISAF Youth Worlds.