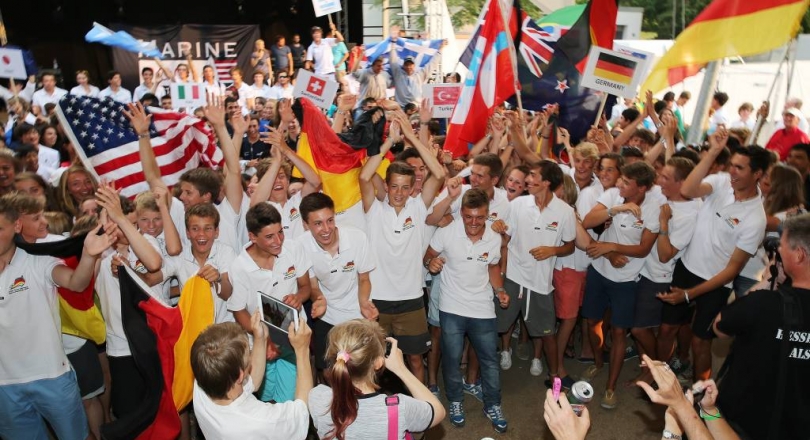 A celebration of sailors and nations was the tone of the 420 Worlds Opening Ceremony on Sunday 27 July, as teams from each of the 27 nations paraded in front of a crowd of supporters, to the accompaniment of their national anthem and  thunderous applause. Two members of the 28 boat German team declared the Sailors' Oath on behalf of all teams, before Nino Shmueli, President of the International 420 Class Association declared the Championship officially open.

2014 marks a great year for participation as the popularity of the 420 Class continues to grow and is reflected in the high entry numbers. Entry quotas limit the number of teams a nation can send to compete, with just 7 teams in each of the Open and Ladies divisions, ensuring that the best teams in the world are on the start line. Many nations run national selection events to qualify their teams, with the quota places hotly contested.

Germany is fielding the largest team, with 14 Open teams and 14 Ladies teams, a right which is accorded to them as host nation. Nations across every continent are competing, from Angola to Korea, Chile to Turkey, Canada to Australia – to name just a few.

There is a long list of potential challengers for podium places; not least some of the faces who claimed medals at the ISAF Youth Sailing World Championships in Portugal in mid-July. But with larger fleets and a different racing format, the cards may shuffle a bit differently in Germany. The team line-ups contain a real mix of renowned names, who we will expect to see at the front of the pack, alongside newer teams who have qualified to their first ever 420 Worlds.

Spain is the defending holder of the Francis Mouvet Trophy as the top performing nation at the 2013 Worlds, a repeat of their 2012 performance, and will no doubt be intent on defending nation glory  again.

420 OPEN WORLDS
In the mix for the podium are the defending 420 World Champions Xavier Antich and Pedro Terrones from Spain, who wrapped up victory in Valencia last year.

“I have been training in the 470 for the past year and only in the past two weeks have we got back into the 420,” commented Antich. “We are coming here intent on defending our World title. The 420 is easier to race than the 470, so I hope that in medium to high winds we will be doing well. But in lighter winds, the challenge will be that we have the crew weight for the 470 .”

Asian teams dominated at the ISAF Youth Worlds, claiming all three podium positions, and lining up against the Spanish will be the recently crowned gold and silver medallists from Portugal, JiaYi Loh and Jonathan Yeo from Singapore and Muhamad Faizal Norizan and Ahmad Syukri Abdul Aziz representing Malaysia.

Speaking on their success in Portugal, Loh said, “We were always in fourth, but then we had a really good second to last day and jumped up to be on tight points with first. All we then had to do was get a good last race to win, which we did.”

The pair certainly weren’t anticipating the gold medal, as Loh explained, “At the beginning we were not expecting such a good result and we stuck to what we wanted to do.”

Their plan worked and follows on from Loh’s success in 2013 when he won the Optimist World Championships. With a win for the pair at the Singapore 420 Nationals in June, 2014 has been a rollercoaster success for the partnership so far, and a 420 Worlds win is now their aim.

“We have our goals and we just have to forget about winning the ISAF Youth Worlds and focus on the 420 Worlds. We need to get the job done here as well,” concluded Loh.

Brazil’s Tiago Brito andAndrei Kneipp secured the 420 Worlds silver medal last year and were awarded the John Merricks Trophy as the best team under-18 team. Their last year success was fresh off a gold medal at the ISAF Youth Worlds. This year the pair faced some stiff competition at the ISAF Youths, finishing 10th overall, so will be interesting to see if they can surface to the front of the fleet in Travemuende.

After making their debut appearance at the 2013 420 Worlds, Angola is again fielding a two-boat team line-up and great to see two new teams competing this year.

420 LADIES WORLDS
Amongst the favourites will be the recently crowned ISAF Youth Worlds gold medallists Silvia Mas Depares and Marta Davila Mateu from Spain. The pair will face stiff competition against other teams who were competing in Tavira, Portugal alongside some experienced 420 World teams.

“What to say, we just won it, it was a dream,” said Silvia on their Youth Worlds success. “We just went there to try to improve on our fifth place last year. But after the first day I realized we were really fast and could win it, so then all day every day we just kept going.”

At the 2013 420 Ladies Worlds, Mas with then crew Nuria Miro, were up at the front for the first few days of racing, before dropping off the pace to finish in 40th.

“I know that when you are training really hard and then enter the major Championships it can be hard when they are close together,” said Silvia. “But this year we had a little more time than last year, a few days more and we will do the best we can. I am feeling very relaxed and we will see what happens,” she smiled.

Also returning for another shot at the podium are Singapore’s team of Kimberly Lim and Savannah Siew, who finished 4th at the 2012 420 Worlds and secured silver last year, and just finished in 4th at the ISAF Youth Worlds.

The 2014 420 World and Ladies World Championships is being held on the sandy Priwall Peninsula off Travemuende  and is organized by the Lübeck Yacht Club in partnership with the German 420 Class Association, Deutscher Segler Verband and the International 420 Class Association.

Huck Scott Memorial Trophy – will be awarded to the youngest team competing in the Championship, in either the Open or Ladies division.

William Sanchez Trophies – will be awarded to the highest placed teams in the 420 World and Ladies World fleets, with both crew members aged 16 or under.

John Merricks Trophies – will be awarded to the highest placed team in each of the 420 World and Ladies World fleet, with both crew members both aged 18 or under.

Francis Mouvet Trophy – will be awarded to the overall top nation, calculated based on the nation who has the highest placed 3 boats in the World Championship using both the World and Ladies fleets.