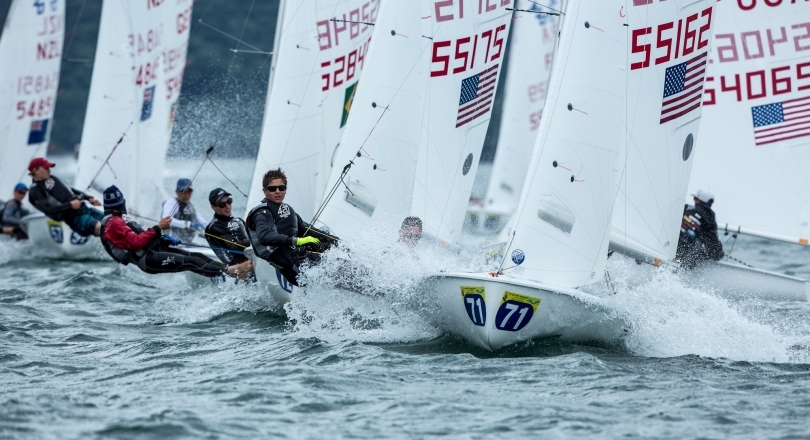 The presentation was a joint effort of the US I-420 Class Association Board and Sail Newport, the latter being the highly successful Rhode Island Public Sailing Center – headed by Executive Director, Brad Read and Regatta Director, Kim Cooper.  Sail Newport Facilities are located in Fort Adams State Park on the shore of famous Newport Bay.

The Championship will take place from the 8-15 August 2018 – right on the heels of Sail Newport hosting the Volvo Ocean Race Fleet for their American stop-over.

This year’s World Championship Regattas for the I-420 Open/Men’s Class; Women’s Class and the new Under 17 Classes (U17) in the Open/Men’s and Women’s Classes drew a record number of entries – 265 competitor boats from all over the World in all Classes combined.  The last time that the I-420 World Championships were hosted in the United States was in 1997…………..that year it was also sailed in Newport, Rhode Island.

The International 420 Class (the original 420 design, 4.2 meter, double-handed high performance dinghy) has been in existence since the late 1960’s and was very active in the US for decades.  The United States I-420 Class became in-active in the late 1990’s at which point in 2000 Tim Hogan (from CISA), Jerelyn Biehl, Brent Boyd, Lori Tabor (all from San Diego), and Larry Law (NBSSA) reorganized the I-420 Class in the US and began training in the US to again send talented sailors to the European events.  Today the US Class enjoys a very talented and highly successful field of younger sailors that compete in many regional and national competitions, as well as sending championship teams (Team USA) to 4 or 5 major international events every year.