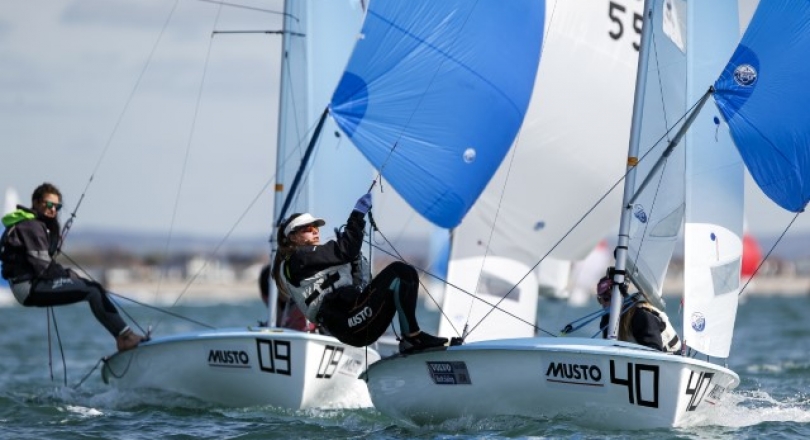 The UK’s premier youth sailing event will welcome sailors to Largs, the Scottish sailing hot spot from 30 March to 6 April, for the 2018 RYA Youth National Championships.

Thirty 420 teams are competing across the 420 Open and 420 Girls fleet, with plenty of talent on the starting line. Here is the RYA's round up of who to watch:

420 Open
There will be 17 boats on the 420 Open start line in Largs and the most recent Spring Championship gives a good indication of the teams to look out for.

Ross Thompson (Loch Tummel SC & Royal Tay YC/Frensham Pond SC) was the winning crew in 2017 and that took him to Sanya, China, for the 2018 Youth Worlds. To repeat the feat he will be relying upon new helm Niamh Harper. But, if the Spring Championships is anything to go, he could be gracing the waters of Corpus Christi, USA, at the 2018 Youth Worlds. Harper and Thompson were in blistering form taking five race wins out of six.

Jack Lewis and Charlie Bacon (Draycote Water SC) may be juniors but they took second in the Spring Championship, claiming the one win that Harper and Thompson couldn’t take for a whitewash. It will be interesting to see if the young dinghy sailors can push their older rivals in Scottish waters.

Harper is a strong Scottish medal hope in the 420 and Calum Bell and Josh Hale (Helensburgh/Loch Lomond/Loch Venachar) will be hoping home waters will also grace them with a good result.

420 Girls
Taking third in the Spring Championship, Vita Heathcote and Milly Boyle (Royal Lymington YC) were the highest placed all female team and will have confidence going in to racing in the 13 boat fleet. The pair showed consistency finishing above a host of mixed and all male teams.

Club mates Charlotte Boyle and Georgia Baker (Royal Lymington YC) are another team who sailed well in the Spring Championship finally finishing in ninth position. Again, in a regatta with mixed crews the pair will fancy their chances to take the Girls title in Largs. Look out for an inter-club contest for the 420 Girls title.

Racing at the 2018 RYA Youth National Championships begins on Monday 2 April through to Friday 6 April in Largs, Scotland.