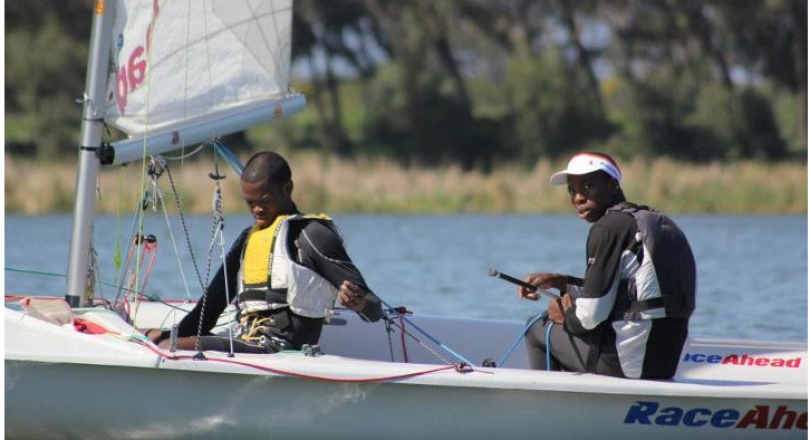 South Africa’s Olympic helm Asenathi Jim transferred his skills from Olympic 470 racing to competing in the 420 at the inaugural event of the newly launched South Africa series, the Southern Charter Grand Slam.

Jim partnered up with Sibusiso Sizathu in the eight race event, and despite not competing in the first two races of the weekend, went onto take two race wins and finish in second overall behind Duane Petersen/Fayaad Shaik. Finishing in third were David Jacobs/Brandon Wittern.

Last month, in August, Asenathi Jim and crew roger Hudson were representing South Africa in the 470 event at the 2012 Olympic Sailing Competition. Jim is no stranger to the 420 and represented South Africa at the 2010 ISAF Youth Sailing World Championships.

The first of the four events in the Southern Charter Grand Slam Series was hosted at Zeekoe Vlei Yacht Club on 15-16 September 2012. The next event will be on 1-2 December 2012 hosted by the Theewater Sailing Club.

About the Southern Charter Grand Slam Series
The Southern Charter Grand Slam Series is a four event series, in a completely new and exciting concept in South African Sailing aimed at taking sailing to a new and higher level in the Western Cape. It represents a paradigm shift away from what dinghy racing has represented over past years. Along with the EPIC SERIES it replaces the former numerous regattas that were previously held at multiple clubs during the past. The Southern Charter Grand Slam Series has as its foundations successful models used internationally. It has not only helped promote and build the exciting sport of competitive sport dinghy racing in some countries, but has also attracted the attention of young people looking for a new and vibrant sport-code in which to invest their time, energies and resources.

Each event is a stand-alone regatta scored individually on the low point system. Every sailor’s result for events will go forward on a high point scoring system to determine the overall series winner, so the bigger the fleets are at each event will mean more competition within each class for the ultimate Southern Charter GRAND SLAM SERIES honours. The overall aim is to make the events much “bigger” than competitive sailing events in the past and also to have more boats and competitors on the water.

The four events are: