Stunning conditions out on the race track at Castle Bay Karatsu, with even a peep of blue sky to surprise the fleet after 5 days of rain and cloud.

A reasonably stable breeze of 8-10 knots from the south, peppered with gusts of up to 20-25 knots, kept everyone on their toes on race day 4 at the 420 Worlds in Japan. One race was held for each of the groups in the 420 Open and 420 Ladies fleets to wrap up the qualification series and decide the gold and silver fleet cuts, before the fleets were sent ashore to deal with any protests and confirm the final series seeding. The U17 fleet stayed out on the race track for three races.

With protests dealt with and a superb breeze continuing on the race track, the 420 Open and 420 Ladies fleets completed the opening two races of the gold and silver fleet final series.

The Championship is proving to be a banker for the all-rounders, those who can punch out the consistent results whatever the unpredictable weather here throws at them.

420 U17
In the under-17 420 World Championship fleet, Edoardo Ferraro/Francesco Orlando (ITA) retain their pole position, with Spain’s Enrique Lujan/Pablo Lujan (ESP) shifting up a gear to second overall. On tiebreak with the Spanish in third are Aggelos Arvanitis/Theofanis Kanakaris (GRE).

“The weather was a bit different to yesterday and a bit more difficult as the wind was really shifty,” explained Ferraro. “We did a mistake in the second part of the first race, so were disappointed to be 7th, but improved for the next two races. Today was better for us with less wind, as we are not really strong.”

In the last race of the day, Veronica, Edoardo’s twin sister was hot on his heels, finishing in 5th to his 2nd place. Racing her first ever 420 Worlds, with crew Giulia Ierardi, they are 10th overall and rank as the top placed girls team in the under-17 fleet.

“This is our first year in the 420 and we are not very strong in these conditions so having our own fleet really helps our transition,” commented Veronica.

Also making their way up the leaderboard are Spain’s Albert Torres/Antoni Massanet who claimed two wins in races 5 and 6. The best friends stepped up from the Optimist class a year ago, where  Torres represented Spain at the Optimist Worlds and Europeans.

“Our last race was a bit bad, as at the start we were on the left, but there was no pressure, so we crossed the first mark in 25th, but just worked really hard to get our 15th,” said Massanet.

“Many things can happen because of the weather,” continued Massanet, as he reflected on the big points margin to break for a chance at the podium. “But we will never give up and we will keep fighting until the end and see what happens.”

420 Ladies
Marta Garrido/María Jesus Dávila (ESP) take over the lead in the 420 Ladies fleet from a consistently superior scorecard. A win to Japan’s Misaki Tanaka/Sena Takano in the final race of the qualification series pushed them up to second overall, with overnight leaders, Charlotte Yven/Marine Riou (FRA), dropping to third.

“We feel very happy and very proud of our work today,” said Garrido. Incredibly the pair are counting an all top three scoreline, racking up two wins and a 2nd place today, to earn a 20 point advantage over the Japanese.

“We are calm, because we don’t have a bad race yet,” smiled Davila modestly. Sailing is very much a family affair, with her brother winning last year’s 420 Open World title, which Maria could soon be about to match.

Of their experience so far in Japan, Garrido commented, “We love Japan. We didn’t expect the people would be so friendly. They are so nice to us. We love the country and the landscape and everything.”

Second placed Tanaka/Takano are amongst the young stars of Japan’s youth sailing programme, along with Mano Udagawa/Yuri Saito who leapt up to 4th overall. A fourth place in the 420 class at the 2014 Asian Games has prepared them well, and with two previous 420 Ladies Worlds to their credit, a 25th in 2014 and 54th the year before, 2015 is all about a podium result.

“Yesterday we made so many basic mistakes,” said Tanaka. “Last night we discussed what went wrong and today we just got better and better,” she said referring to their 1,4,3 scorecard. It is now all about defending their leaderboard position.

“The Spanish are really strong,” continued Tanaka. “So we will focus on keeping our second place and if we get the chance we will go for first. We need to keep our minds clear. We have trained here before, so are getting used to it, but the wind is always different.”

There is no shortage of inspiration for them to follow, including Yumiko Shige, the 420 Worlds Event Manager, who won Japan’s first ever Olympic sailing medal. Her silver medal glory in the 470 Class at the 1996 Olympics, with crew Alicia Kinoshita, was followed up by Kazuto Seki/Kenjiro Todoroki who claimed bronze at the 2004 Olympics in the 470 Men. No wonder Tanaka has her heart set on Olympic gold in the 470 – and Tokyo 2020 is not too far away.

“It is our dream,” she confirmed.

Competing in their third and final 420 Worlds, Great Britain’s Sarah Norbury/Mari Davies have taken a slow and steady approach, moving up the leaderboard day by day. In 6th overall, they are well up with the series leaders.

“We had a tough first race today,” commented Norbury. “But going into gold fleet we had our heads in the right place and consolidated with two really good scores, so we are happy with that.”

“The fleet’s really good,” added Davies. “And the Spanish girls always seem to know what is going to happen before it happens,” she laughed. “It is quite hard and also this is a really difficult venue to race in. I am really proud of how we have sailed today and we have really managed to link into what is going on. We were struggling the first few days to find the pattern here.”

420 Open
All change in the 420 Open leaderboard, as Japan’s Hiroaki Kato/Takuma Yoshinaga (JPN) claim the leaders’ yellow jerseys by one point over the USA’s Will Logue/Bram Brakman. The Americans were one of the biggest gaining teams today, leaping up the leaderboard from 14th at the start of the day to 2nd by the end. Yesterday’s leaders Nikolaos Brilakis/Giorgos Karadimas (GRE) drop to third.

Logue/Brakman rose to the expectation of gold fleet racing, scoring 1,3,2 finishes for their best day of racing so far, to sit just 1 point off the series leaders. Sailing together for about 18 months, a 2nd at the Worlds marks the team’s top placing at an international event so far.

“Today was a good day, nice breeze, although pretty shifty coming off the land,” said Brakman.

“We like that, it is our favourite mission. The key for today was playing your side and staying in consistent pressure. The important thing was to get off the start, get off as clean as you can, get away from as many boats and just get into your own breeze and sail your own race.”

Anticipating the 4 races ahead, Brakman continued, “We will now race conservatively and not make too many radical moves upwind.”

They are joined in the top 10, by team mates Wiley Rogers/Jack Parkin (USA).

The Asian push to the front of the fleet continued with Hong Kong’s Calum Gregor/Hugo Christensson, who couldn’t have knocked out a better day with results of 1,2,3. Their first 420 Worlds was last year, where they finished 14th, and they seemed quite surprised to find themselves in 4th overall after 8 races.

“I really enjoy the technical side of sailing the 420. There is so much you can do with the rig and it is really interesting and good fun,” explained Gregor.

Ustream Live Updates - you can follow the live streaming with cameras following the racing action off the start, mark 1 and at the finish. Click on the graphic to the left or go to: http://www.ustream.tv/search?q=karatsu 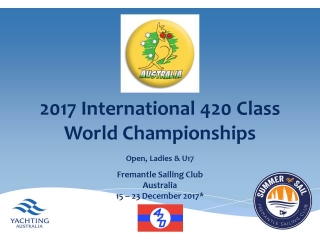