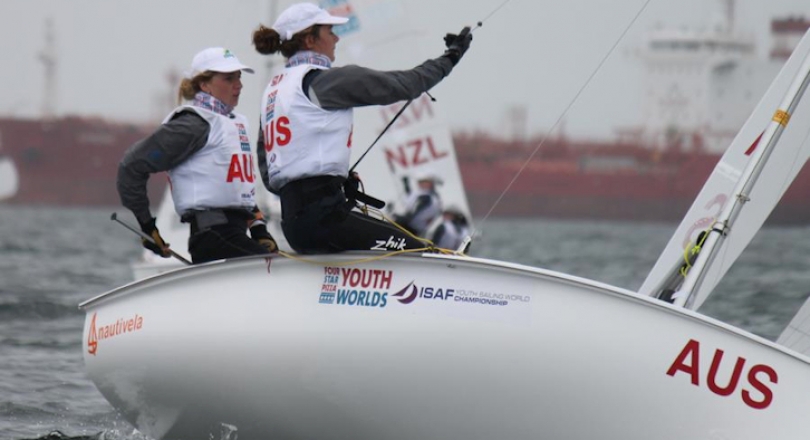 With seven races now sailed and a layday tomorrow, the Youth Worlds have reached their halfway stage with still three days of competition left on Dublin Bay.

Results remains closest among the 420 Girls leaders where, after they sailed “a blinder”, scoring two bullets today, Australia’s Carrie Smith and Ella Clark are now tied on 20 points with yesterday’s leaders, Annabel Vose and Kirstie Urwin (GBR), in turn two points ahead of Italy’s Ilaria Paternoster and Benedetta Disalle.

Clark described how they managed this, “We just stuck at it, tried to focus on defending our second, but at the same time when we got the opportunities to come up to first, we just took them. It was really tricky today, really shifty again.”

As forecast, the wind veered west and built this afternoon, affecting their second race. “We felt more comfortable in the second race when it picked up, but we’re happy for anything - we just enjoy sailing. Any weather’s fine.”

Smith and Clark come from Perth, where they sailed the Olympic 470 at the ISAF World Championships last year. This is their second Youth Worlds having finished fourth in Croatia and they have another left before they get too old. “We weren’t expecting anything last year and we ended up doing really well, so we thought we’d give it another crack, try harder again this year and its all working out at the moment...” says Clark.

They have had the considerable benefit of having two 470 Women’s gold medallists coaching them - first Belinda Stowell and for the last six months, Tessa Parkinson.

Holding fourth place, 14 points off the leaders are Chileans Nadja Horwitz and Francisca Fuentes, coming fresh from victory at Kieler Woche. This is Horwitz’s second Youth Worlds, “It is really important, the most important event of the year,” she says. They are one of only two 420s from Chile sailing all years around. “It is difficult to sail over there. We don’t have a big fleet or much skill, so to stay good we have to travel a lot and that means we have to find money and it is not easy.” 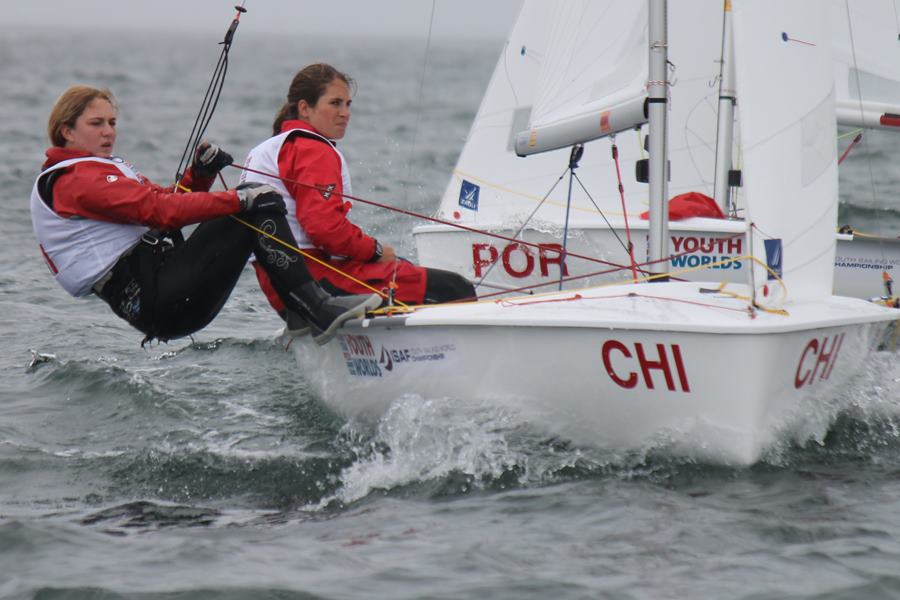 Unlike the Girls, among the 420 Boys, France’s Guillaume Pirouelle and Valentin Sipan have extended their lead to 16 points over Pieter Goedhart and Lars van Stekelenborg (NED), despite the Dutch duo having the best day, posting a 1-3.

“Today we had some good starts,” said Pieter. “I thought the conditions were really good. The first day it was a little bit light, but today the second upwind was really hard because the wind fell off and then it came up from the right and there was big current too. In the second race, there was more wind, and we like more wind.”

As to the French leaders Lars reckons they’re fast. “And their tacks are really good on the shifts.”

From the picture postcard island of St Johns in the US Virgin Islands, Ians Barrows and Coyle struggled, scoring a 8-18, although they remain 10th in the 30 strong 420 Boys’ fleet. “It was kind of puffy, not really consistent, and at the end though, it got really windy,” said Coyle of the conditions. “And it’s cold...really cold.”