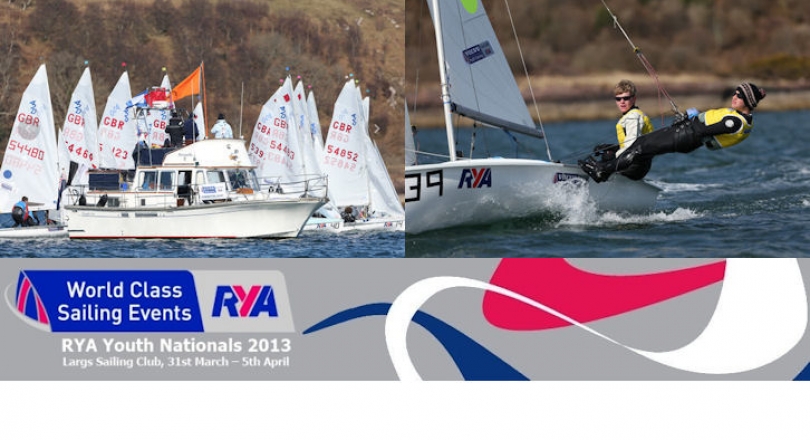 Spells of sunshine and a shifty 12-14 knots of wind greeted the 333 sailors vying for championships honours this week at the 2013 RYA Youth National Championships as they took to water for a cold yet cracking opening day of competition on Monday 1 April.

Racing kicked off, as scheduled, at 1130 hours with the nation’s finest youth sailors and windsurfers joined by competitors from Ireland, Serbia and New Zealand completing the full schedule of races as they engaged in a thrilling day of racing on the Firth of Clyde. Joining the 420 fleet, are the 29er, Laser, Laser Radial, RSX Girls and Boys and Spitfire classes.

The 420s were racing on course area B situated between Largs and Cumbrae, where Tim Riley and Luke Burywood led the way with a 1-2-5 from their three races today. James Taylor and Tom Lovesey posted a 5-4-1 putting them second overall and Scotland’s Callum Airlie and Joe Butterworth sit just behind in third with a 7-1-4 for their efforts today.

Burywood said, “I think they were definitely the hardest conditions we have ever sailed in, it was really tough today! We are happy with our results and will continue to move forwards throughout the week. I have only been sailing the 420 for six months so we are not putting ourselves under too much pressure, although it would still be nice to do well!”

Leading the charge in the female 420 fleet is Annabel Cattermole and Bryony Bennett Lloyd. The pair posted a 2-8-3 to see them sitting in fourth overall, 11 points ahead of Jemima Lawson and Lily Summers who finished the opening day with a consistent 9-6-9.