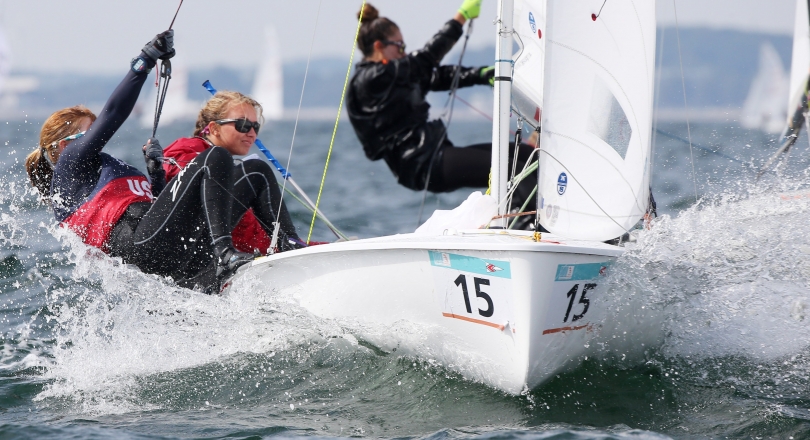 7 races over 3 days of racing delivered victory to Klingler/Thompson who sealed their overall win by 3 points and are the top placed girls team.

In reality, the challenge for the yellow leader’s bibs was between Klingler/Thompson and Wiley Rogers/Jack Parkin, who opened the series leading on day 1 with two race wins.

By the end of day 2, all change as Klingler/Thompson took over, going on to sail a solid 3 races series on Monday’s final day of racing to wrap up their first 420 North American Championship title. A nailbiting finish, as all could change depending on the result of the final race. Rogers/Parkin in second and William Logue/Bram Brakman third.

Behind the top two teams, the pionts were very close with an intense battle between the teams eventually finishing in third, fourth and fifth places to be the one rounding out the podium top three.

Teams had travelled from around the United States to compete, with sailors from Connecticut, Texas, New Jersey, New York and California, to name a few home states.

Next event for the 420 North American fleet is the 2015 420 Mid-Winter Championship at the Texas Corinthian Yacht Club in Texas, 31 January-1 February, and then the 2015 420 Gulf Coast Championship at the same venue from 28 February-1 March. 470 Olympian Sarah Lihan will be running some 420 Clinics the weekend before on 24-25 January and again through February and March, on 14-15 February, 21-22 March, 28-29 March. Some 420s are available for charter at the Mid-Winters.

Find our more about the US International 420 Class Association