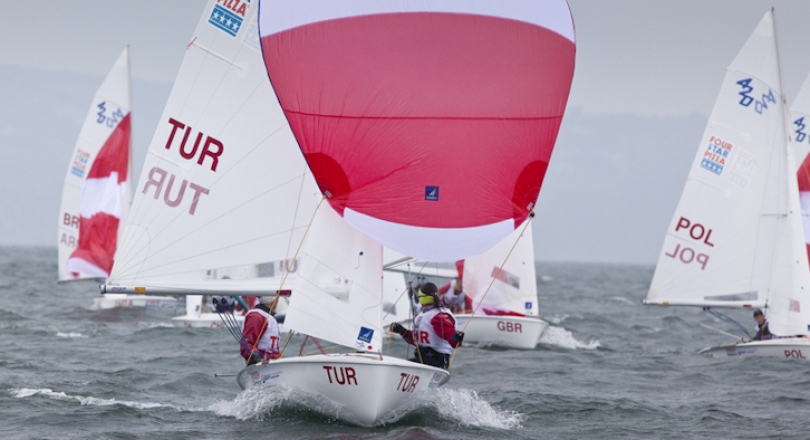 Dublin Bay threw up a surprising mix of light to moderate winds, 4-15 knots, with shifts and gusts as clouds passed over, allowing the occasional glimpse of sunshine through.

In the 420 Men, France's Guillaume Pirouelle and Valentin Sipan lead Spanish twins, David and Alex Charles, by a mere point. The Spanish crew's scorecard is 6-1 after day one, in the latter rounding the weather mark third before picking off the two boats ahead of them. "We expected to do well, but we didn't think we would be doing so well after the first day," said helmsman David. The twins, who herald from Barcelona, finished second at Kiel Week this year. Their thoughts about the waters off Dun Laoghaire today were an understated "it was quite cloudy."

The competition remains tightest at the top of the 420 Women's class where five boats are tied on 11 points - between Israel, Italy, Singapore, China and France. Israeli crew Rimon Shoshan was shivering when she came off the water. "It was very cold at first. The sea was very choppy and we cannot get used to these sailing conditions, but otherwise it was fine." She says she is impressed by the organisation of the Four Star Pizza ISAF Youth Sailing World Championship, but is struggling with her boat - all the equipment at this event is supplied by the manufacturers while the sailors are typically more used to sailing their own boats.

Three more races are scheduled for day 2, Sunday 15 July 2012, at the Four Star Pizza ISAF Youth Sailing World Championship when more wind is forecast with 15-16 knots out of west.