Another epic day with breeze of around 20 knots across the two race tracks at the 2019 420 World Championship in Vilamoura, Portugal.

Today was the make or break day of the qualification series for the 456 sailors trying to check in and secure their advance to gold fleet racing for the upcoming 6-race final fleet series, which starts tomorrow.

Fantastic conditions for both races with consistent breeze and waves across the race tracks for the Open, Women and U17 fleets.

Final series racing is scheduled to get underway at 1400 hours on Tuesday 9 July with two races for all fleets.

420 OPEN
Seb Menzies/Blake McGlashan continue to dominate the 420 Open fleet, but they couldn’t repeat their winning ways today, racking up scores of 11,4.

Behind, team mates Mason Mulcahy/Andre Van Dam remain in striking distance and have closed the gap to the leaders to just 4 points.

Back to back wins went to Olympian Onan Barreiros partnering with Ana Santana in the yellow fleet, with fellow Spaniards Nacho Davila/Javier Mestre doing the same in the blue fleet.

Experience counts, and back in 2003 Barreiros won the 420 World Championships at Hayling Island, Great Britain – a victory which launched him into his 470 career including two Olympic appearances.

“It was the first time we sailed together, my crew was a newcomer to the class, but with the 420 Worlds so close to home we decided to try to qualify for it,” explained Barreiros. “These are working holidays but we are having a great time here in Vilamoura with an amazing organization and great sailing conditions”

Racing in the eighty-nine boat 420 Open fleet advances to gold and silver racing from Tuesday 9 July, with the top 45 boats in gold and the remaining 44 in silver. Qualification couldn’t get closer with the boats placed 45 and 46 on a tiebreak of 107 points, and the gold fleet ticket advantage going to Alexandre Grognuz/Siméo Vollmer (SUI)

420 WOMEN
A changing of the guard in the 420 Women fleet, as overnight leaders Eleanor Keers/Faye Chatterton struggled in today’s challenging conditions and plummeted out of the top 10 to find themselves with a mountain to climb sitting back in 23rd overall.

The series lead was briefly in the hands of Poland’s Gabriela Czapska/Hanna Rajchert after race 5, but all change as a win in race 6 pushed Great Britain’s Vita Heathcote/Milly Boyle into pole position.

Birthday celebrations on board the British boat, with Heathcote celebrating her 18th in style, saying, “I am just so happy, a Birthday win was amazing, the best feeling. The conditions were perfect, it couldn’t have been better conditions. Vilamoura has definitely delivered.”

A very exuberant Boyle added, “So much fun. The wind was really good for us, we really like it when it is windy. The waves as well, it was just loads and loads of fun, going fast – sending it.”

Second overall to Spain’s Marina Garau/Blanca Cabot. Italy’s Irene Calici/Petra Gregori enjoyed wins in both yellow fleet races and gear up to 3rd, a major climb of 9 places compared to their placing at the start of the day.

420 U17
Odysseas Spanakis/Konstaninos Michalopoulos (GRE) relished today’s breeze and waves, busting their way round the track to score two more wins in the yellow fleet and hold firmly onto the lead.

The Greeks are not yetsending the competition home, and still pursuing them up the leader board are France’s Ange Delerce/Timothee Rossi, who won the second race of the day in the blue fleet, but picked up their discard in the day’s opening race to sit just 2 points behind the Greek pair. Moving up to third are Germany’s Florian Krauss/Jannis Suemmchen.

The top thirty-three teams in the U17 fleet now advance to gold fleet racing, and again a tiebreak decided who made gold or silver fleet, with two women teams placed 33rd and 34th on 70 points each. The final boat making the gold cut was the Greek team of Dimitra Vartholomaiou/Metaxia Gogou. 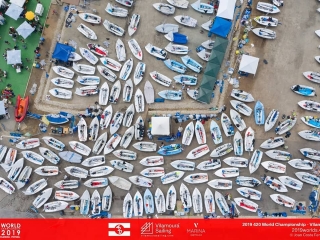