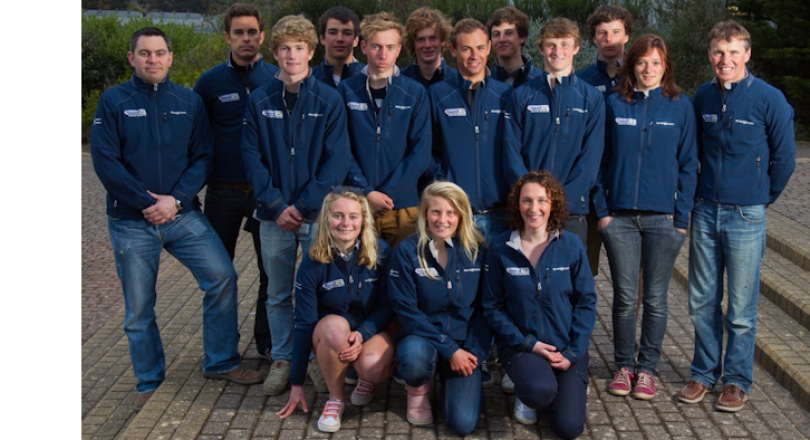 With the RYA Volvo Youth National Championships 2012 coming to a close on Friday 6 April after four days of adrenaline-charged racing in Cardigan Bay, the names of the twelve sailors who will represent RYA Volvo Team GBR at the ISAF Youth Sailing World Championships were announced.

The ISAF Youth Sailing World Championship 2012, to be held from 12-21 July in Dun Laoghaire, Ireland, is the 42nd edition of the championship. The venue for the championship will be the Royal St George, National and Royal Irish yacht clubs on Dublin Bay. The event is dubbed as the pinnacle event of the Youth sailing calendar, seen by many as the ‘Youth Olympics’ for sailing, and has over the years identified talented sailors such as Olympic gold medallists Ben Ainslie, Iain Percy and Sarah Ayton.

The 420 teams demonstrated the level of racing they are capable of with two fantastic performances across the four days of racing. Annabel Vose/Kirstie Urwin, both from Royal Lymington Yacht Club, will lead the charge in the female fleet whilst in the 420 boys class, Charlie Cox/Craig Dibb will once again make the trip to the ISAF Youth Worlds with the intention of improving upon their top ten finish at last year’s event.

“We definitely want to go to this year’s event with the intention of winning a medal. Last year’s event in Zadar was more of a process regatta for us were we went with the intention to learn and test ourselves against the best sailors from around the world. This time around it is certainly an outcome regatta - we will be aiming to perform to the best of our ability and fingers crossed bring back a medal,” explained Cox.

Dibb added, “We learnt a lot from the regatta last year and also from the RYA Volvo Youth Nationals this week. We unquestionably need to go back to our local sailing club and work on a few key aspects which let us down in certain races this week. The most important being how to deal with racing when under pressure.”

On the selection of RYA Volvo Team GBR, Duncan Truswell, RYA Youth Racing Manager, commented, “It looks like we have a really exciting team for the 2012 Four Star Pizza ISAF Youth Sailing World Championships. Amongst the members of RYA Volvo Team GBR there are a number of previous medallists at Junior, and Youth, World and European Championships who I am sure will be keen to exhibit their skills and hopefully challenge for the medals on the big stage. We also have some young sailors who will be keen to soak up the experience, there are some really hot prospects in this team and no doubt they will be ones to watch for the future.

“Irrespective, to win their place in the team they have all worked very hard this week, they dug deep to win the regatta in every case on the final day, because it has been a really closely fought contest and I am really pleased to see that our sailors can keep their heads, deliver under pressure, and get the results when it counts – this will be the measure of them out in Ireland.”