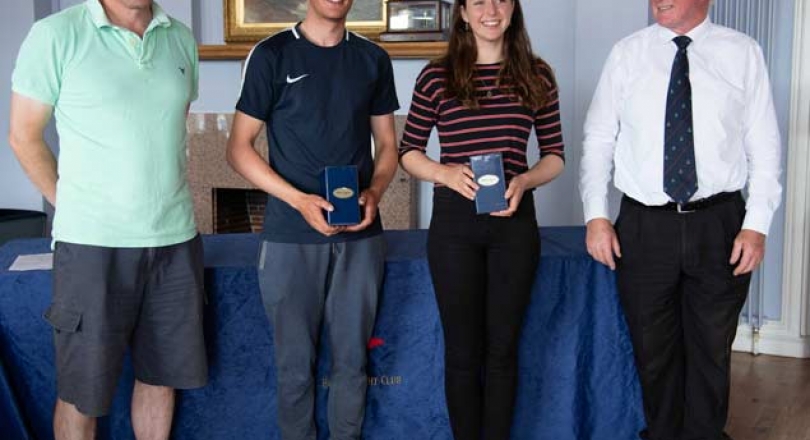 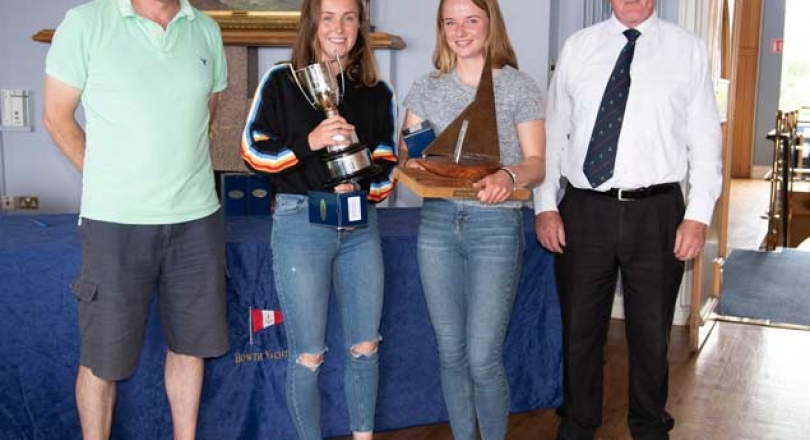 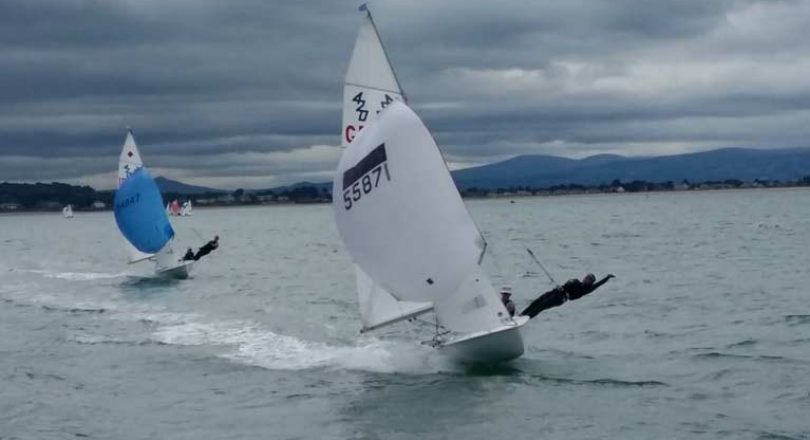 Alex Colquitt/Rebecca Coles on their way to victory © Event Media

420 racing concluded on 6 August at Howth Yacht Club with the third day of racing in the 2018 420 Open and National Championships.

And what a week it was, it kicked off with a three-day training module followed by a second one-day training module prior to the start of championship racing. The Howth venue has in the past attracted visitors from the UK over to compete and whilst the event does overlap with the 420 Worlds in Newport, Rhode Island some visitors made it across.

The first two days of racing were in moderate winds. Day one produced a nine-point spread covering first to fifth positions and this spread increased to eighteen points at the end of day two when a pattern emerged with the GBR team of Alex Colquitt/Rebecca Coles putting together a string of race wins to carry a score of 6 points ahead of Grace O’Beirne/Kathy Kelly of the Royal St. George on 13 points and Gemma Mc Dowell/Emma Gallagher on 17 points of Malahide Yacht Club. Tied on 24 points each, fourth overall and third Irish boat were Micheal O’Suilleabhan/Rob Keal of Kinsale Yacht Club and Morgan Lyttle/Patrick White of the Royal St. George Yacht Club and Lough Ree Yacht Club respectively.

So it was all to play for on the final day with two races held in a freshening but challenging breeze that was oscillating through 60 degrees and ranging from 6 to 14 knots. Alex Colquitt and Rebecca Coles had enough cushion to all but have wrapped up the open title so the real contest was going to be for the Irish National Champions title and the Irish Sailing medals. Race 8 allowed the leading GBR boat to nail down the Open Champions title with another win but the chase to be Irish Champion hotted up with Mc Dowell/Gallagher closing the gap on the leading Irish boat of O’Beirne/Kelly to three points. So all to play for in the last race and the title was won between the final weather mark and the finish. With Mc Dowell/Gallagher rounding the final weather mark in first place hotly pursued by Colquitt/Coles it looked as if they may have done enough to close out the 420 National Championship title with O’Beirne/Kelly rounding in fifth. But it is never over until it is over as the saying goes and a lot can happen in the final downwind leg followed by a mark rounding to the finish. The tight battle between the two leading boats in the final race ended with Colquitt/Coles claiming another win and the first two boats were able to then wait to see how the race was unfolding behind them. The next three boats were closely spaced and O’Beirne/Kelly were able to reel in the two boats ahead of them so that when a luffing duel started they were able to surge through to take third place in the final race and with it the title of Irish National Champions and first ladies crew.

The overlapping of the Irish 420 Nationals with the Worlds in the USA meant that Ireland was represented by sisters Nicola Ferguson/Fiona Ferguson, who won the Irish Sailing Youth Pathway National Championships earlier in the year. They finished 31st in Newport, USA.