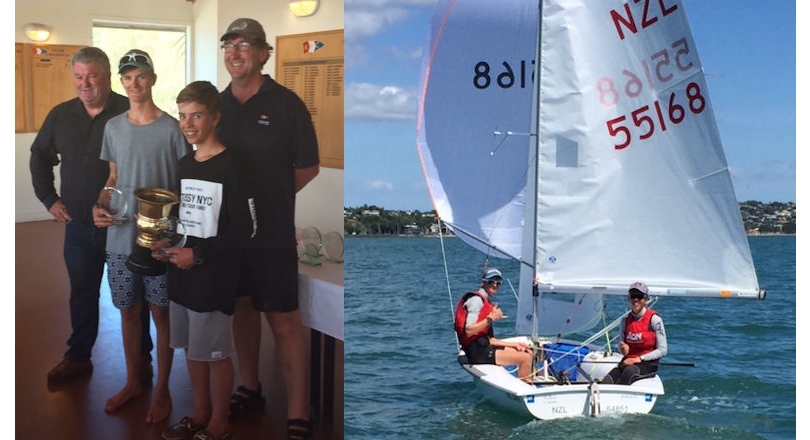 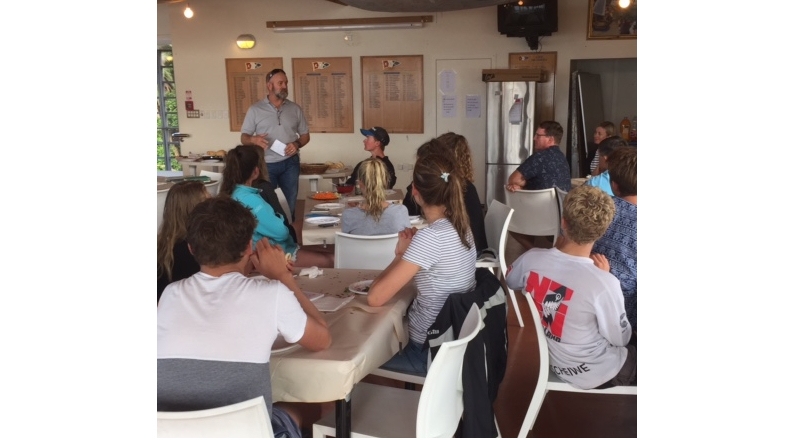 Jez Fanstone drops in for after dinner talk © Event Media

An epic scoreline of 10 wins from 12 races rewarded Josh Berry/Henry Haslett with victory by an overpowering 18 points.

The 2016 420 Nationals were held over four days 10-13 March at Kohimarama Yacht Club in a range of conditions that tested the sailors. Day 1 started off with a medium breeze that built to a solid 18-20 knots for the final race and it saw Josh Berry and Henry Haslett take a 1-1-3 for the day to give them a small lead over Jono Weston/Taylor Balogh.

Day 2 started with some heavy rain and wind squalls but it settled down around midday and sailors were treated to breezes of 10-15 knots which produced an opportunity for RO Steve Pyatt to put in an extra race, allowing four races. Berry/Haslett dominated the day with a 1-1-1-1 giving a handy extension on their overnight lead.  That left a tightening up of the next 2-4 places where the Australian girl’s crew of Sophie McIntosh and Emily Summerell were on equal points with 2nd placed Weston/Balogh who held an overnight 2nd place on count back. The next three placed crews of Courtney Reynolds-Smith/ Brianna Reynolds Smith, Alice Haslett/Annabel Cave and Xanthe Copeland/Kerensa Jennings were also all in the mix for a top 5 result.

Day 3 was a stunning Auckland day with shifty breezes of 8-15 knots. Berry/Haslett continued their form and posted a 1-1-1 for the day giving them a comfortable 14 point lead over 2nd placed Weston/Balogh who managed to put a 6 point margin between them and the third placed McIntosh/Summerell, the Australian crew.

Day 4 started light and ended light and with only two races needed to complete the regatta, Steve Pyatt was keen to get the races underway before the breeze died completely. With a start for both races in 5-8 knots the sailors went on to be challenged in oscillating breezes of 1-8 knots and it made for some tricky sailing. The girl’s crew of Xanthe Copeland/Kerensa Jennings sailed a solid race and took out race 11 before Berry/Haslett resumed their form and completed the regatta with a 1st, giving them a final result of 10 wins from 12 races and a winning margin of 18 points over 2nd placed Weston/Balogh.

For Henry Haslett this was his second 420’s National win, having skippered to victory last year with Jeremy Mitchell at Naval Point YC. Moving to crew this year with skipper Josh Berry, who took the opportunity to move early from the Optimist after proving himself, locally and internationally, as an able Optimist and P Class sailor, has proved worthwhile.

The 420 Association thanks RO Steve Pyatt for his skill in managing the regatta, YNZ High Performance Director Jez Fanstone for his inspirational dinner speech and Kohimarama Yacht Club and Class President Richard Cave for hosting the 420 Nationals. 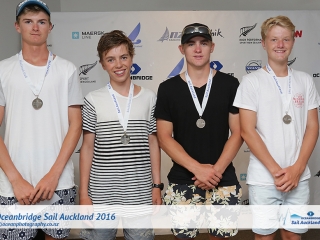