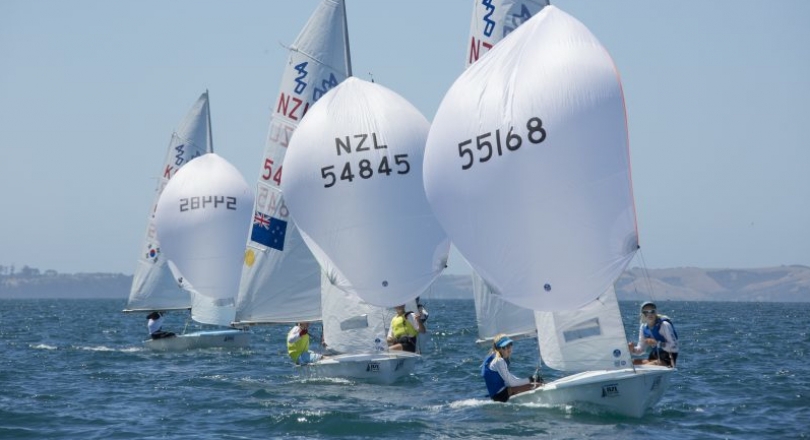 The inaugural Oceanbridge NZL Sailing Regatta wrapped up in Auckland on Sunday 5 October after 3 days of racing and an 8 race series for the 420 fleet.

Hosted at Murrays Bay Sailing Club, the twelve 420s were in a close points battle right until the final race, with the leading three teams holding the points edge.

The three days of racing featured some 140 Olympic and youth class sailors across 10 fleets competing side-by-side off Murrays Bay Sailing Club, and while some of the fleets were dominated from day one, the top bunch in others came down to the final race this afternoon.

After an initial postponement this morning due to no wind, the afternoon saw a fluctuating North to North Easterly breeze fill in which made for challenging conditions on the race course.

Using the light winds to their advantage however was Wakatere Boating Club’s 420 dinghy class pair Ella Gladwell and Alice Haslett, who won their last race to take out the regatta after being locked on points at the top with fellow club members Robbie McCutcheon and Jonothan Weston going into the day.

Having only sailed together for a month and a half in the class, which is recognized as a stepping stone to the Olympic 470, the girls say they were pleased to come away with a win.

“It feels good, we’re happy with how we went today. For us doing well came down to looking for pressure and playing the shifts which we managed to do well in the last race,” Haslett explained.

The pair are already looking forward to their next competition, the 420 National Championships in Wellington.

Third to Xanthe Copeland and Annabel Cave, just one point behind.