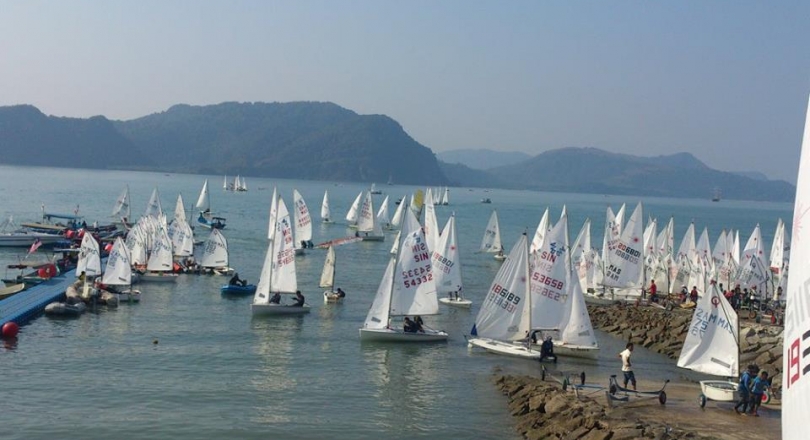 A packed 12 race series was more than enough to put the nineteen 420 teams representing Chinese Taipei, Macau, Malaysia, Philippines, Singapore and Thailand through their paces over four days of racing at Langkawi, Malaysia.

The annual KFC Langkawi International Regatta Perdana is a high-profile event in the region, regularly attracting a talented line-up of sailors from Asian nations. This year the competition intensified, as from 27 December 2015-3 January 2016 the same venue, Malaysia's National Training Centre, will host the 2015 ISAF Youth Sailing World Championships.

With an age limit of under-21 years the 420 fleet was a hotbed of young talent from around Asia.

420 Boys
Twelve teams lined up in the 420 Boys fleet, with an unassailable victory going to Malaysia's Muhd Uzair Amin Bin Mohd Yusof/Naquib Eiman Bin Shahrin. After discarding finishes of 3,2, the pair counted a scoreline of ten race wins - there was no catching them.

Singapore's Loh Jia Yi/Mathew Scott Lau were in second and Malaysia wrapped up the podium third place from a solid performance by Mohd Isan Bin Ali/Amirul Mukminin Bin Ramli, who scored the only other two race wins. The Singaporean helm, Loh Jia Yi, won gold at the 2014 ISAF Youth Worlds, so having beaten him, motivation will be high for Malaysia's winning team this week.

Some really strong results in the top three from the teams representing the Philippines and Thailand, keeps them poised for strong finishes when they face off against the world's youth talent pool later in the year.

420 Girls
A much closer battle unfolded amongst the teams from three nations in  the 420 Girls fleet. Malaysia's talented pairing of Nor Adriana Adlyna Bt Mohd Nazri/Siti Nor Fatihah Bt Norulakhairi were head to head in the final race with Singapore's Bertha Han Jing/Aqylla Bt Jumali.They needed to make up a 2 point deficit to catch the Singaporean team. Fortunately for them Han Jing/Bt Jumali scored their worst result of the series, a 7th place finish, compared to the Malaysian's 3rd. So gold to Malaysia and silver to Singapore.

Thailand's Chaninat Poolsirikot/Piriyaporn Kanekla also put in a strong performance to finish third overall, counting two race wins in their mainly top three finish scoreline. Thailand last competed in the 420 Girls event at the ISAF Youth Worlds in 2012, so hopefully it will be this young team making their nation proud in a few months' time.