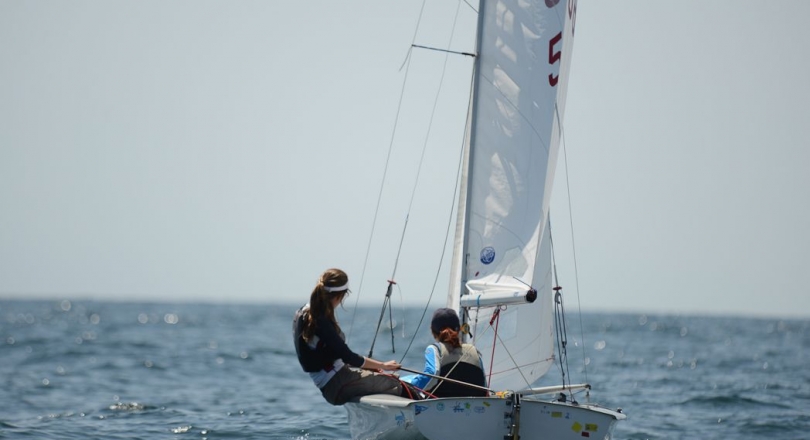 Irina Zendrera/Carla Zendrera (ESP) leaving everyone behind them! © Alfredo Llobet

After two days of racing and 6 races at the 2013 Mediterranean Sailing Meeting hosting at Club Nàutic El Balis on Spain’s north-east coast, it was a battle between the girls for supremacy in the 16 boat 420 fleet.

An event of two extremes weatherwise, with cloud and rain on Saturday giving way to sunshine and light wind on Sunday, which ultimately kept the teams ashore waiting for the wind to fill in.

Sisters Irina Zendrera/Carla Zendrera from the host club won by a narrow 1 point margin over Silvia Mas Depares/Nuria Miro. Four races were held on Saturday’s opening day, which put Irina Zendrera/Carla Zendrera and Silvia Mas Depares/Nuria Miro on euqal points across the four races, but the advantage went to Mas Depares/Mir with the discard knocking out their 8th place from race 3 and given them a narrow 3 point advantage going into the final day. Wins were the only option for the Zendrera sisters to claim victory, and they put in a flawless performance and were totally in control claiming a win in each of the two final deciding races

The 420 boys only got a look in from the third finisher onwards, which was helmed by Marta Torner Rubies and crewed byu Enrique Mir Pons.the

A 420 training clinic was held immediately before the Mediterranean Sailing Meeting, which combined training for sailors in the 420, Optimist, 29er and Laser. The clinic format was 3 days of lectures and on the water drills followed by 2 days of racing.