The Notice of Race has been published.for the World Championships will be located at Saga Prefecture Yacht Harbour, Karatsu, Japan with racing out on Castle Bay.

The Under-17 age division is restricted to athletes aged 16 and under at the end of 2015, with each NCA entitled to three additional entries in each Championship for teams under-17, with the host nation entitled to an additional six entries per Championship. Under-17 teams can choose whether to sail in the main World Championship fleets or race in the under-17 fleet, which will feature all teams racing together. 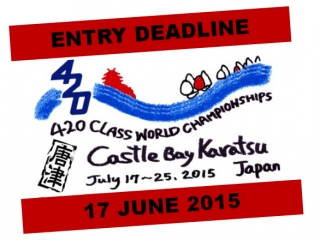