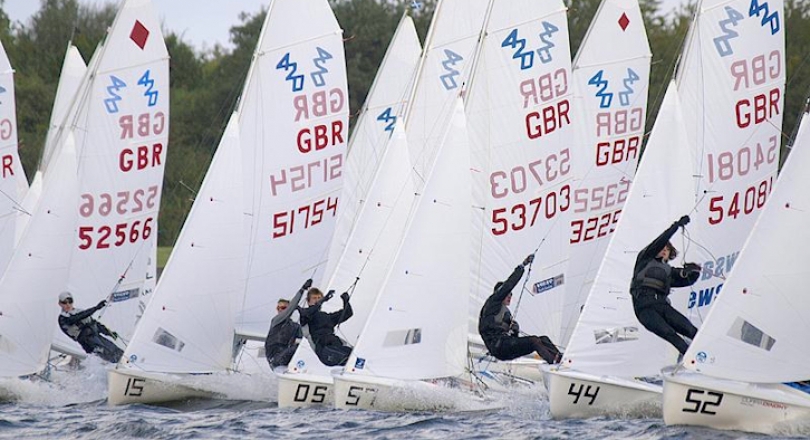 Thirty-four teams from the British 420 fleet gathered at Burton Sailing Club for their Inland Championships over the weekend of 29-30 September 2012. With the annual post-Nationals migration of established sailors off to University and the like, there was a new look to the fleet, with many new faces and new partnerships.

Callum Airlie, who hit the world's headlines for lighting the Olympic flame at the Opening Ceremony of the 2012 Olympic Games, was in fine form to claim the 2012 British Inland Championship title with crew Joe Butterworth last weekend.

Competitors were greeted on Saturday by sunny skies, a very friendly club and about 15 knots of breeze, but with big gusts and lulls. 420s move pretty fast in those conditions, so that meant four laps of a fairly short course, which led to lots of mark rounding practice and boat on boat action!

Race 1 got away under the watchful eye of PRO Adrian Stogall, but turned into a practice race when the leeward mark decided to make a break for the shore. The restart saw James Taylor/Tom Lovesey take an early lead that they never relinquished, being followed home by Callum Airlie/Joe Butterworth, Toby Morsley/James Dodd and Craig Dibb/Matt Wallis.

For race 2 the course was changed to a windward-leeward. Tim Riley/Luke Burywood took an early lead but, in a foretaste of the rest of the weekend, Airlie/Butterworth clearly relished the conditions and forged through, winning from Dibb/Wallis, with Riley/Burywood in third. Airlie/Butterworth repeated their success in Race 3, this time followed by the ladies team of Annabel Cattermole/Bryony Bennett-Lloyd, with Morsley/Dodd in third.

Saturday finished with Race 4, with a win for Scott Wallis/Josh Voller, Ben Hazeldine/Rhos Hawes in second, and Airlie/Butterworth in third. After racing, class coach for the weekend Jonny McGovern gave all the sailors a great debrief on the day’s events.

The next major event for the 420 fleet will be the End of Season Championships on 24-25 November 2012, but before that the class have a busy program of autumn training, both national and regional.

For details of what is going on visit the British 420 Class Association website at www.420sailing.org.uk