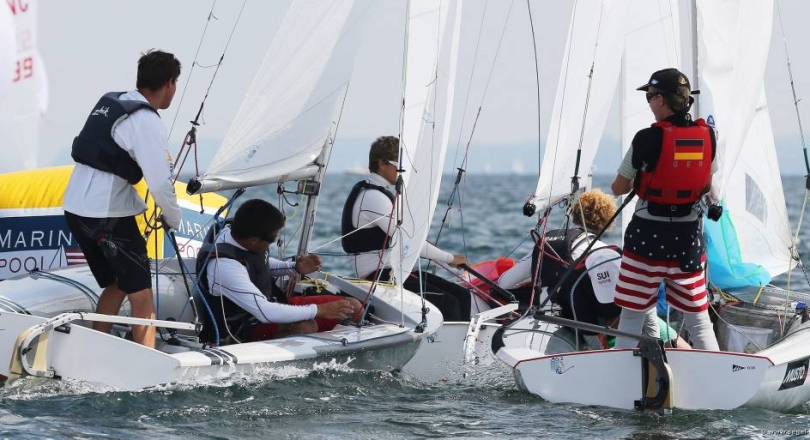 Stunning performance on the opening day of the 2014 420 Worlds from Spanish sailors who top both the 420 Open and 420 Ladies leaderboards.

After a short postponement on the water waiting for the breeze to fill in and stabilize, racing got underway in a light breeze of around 8 knots at 1300 hours, with two races held for all fleets.

Teams were seeded within the 420 Open and 420 Ladies fleets by nation, so a random allocation of teams to each fleet for the first day of racing, with teams re-seeded for race day 2 based on today’s performance.

One day down and two more to go in this opening 6 race qualification stage of the 420 World Championship, with a reserve day scheduled on Thursday 31 July. For the 6 race final series from Friday 1 to Sunday 3 August, fleets will be split into gold and silver fleets.

420 OPEN
Italy’s Edoardo Ferraro/Francesco Orlando secured a decisive win in the yellow fleet, chased by Swann Hayewski/Alexis Thomas (FRA). The Swann/Thomas partnership finished third at the French 420 Nationals earlier this month, where they faced many of the teams competing here in Germany

Onto race 2 and in the yellow fleet, the USA’s Jack Parkin/Florian Eenkema van Dijk took the bullet. Over in the blue fleet, some impressive racing from Angola’s Francisco Antonio Kilombo/Francisco Kupusso Artur saw them up in second place at the first mark, eventually going on to finish 4th in race 2, which counters their 53rd in race 1. In the blue fleet, the win went to Dominguez/Abalo which pushed them up to first overall.

As predicted by defending World Champions Xavier Antich/Pedro Terrones (ESP) yesterday, the pair struggled to find pace in the light breeze as their weight is optimized for a 470 not the lighter 420, ending day 1 in 30th from an 8.26 scoreline.

420 LADIES
Greek dominance in the opening racing of the day with wins to Aikaterina Tavoulari/Sotini Koutsoumpou (GRE) in the yellow fleet and Souzana Bakatsia/Nikoletta Papageorgiou (GRE) in the blue fleet – always a boost to open with a win. But a total change of fortunes in race 2 saw them both taking mid fleet finishes.

Behind the race leaders in the yellow fleet Jessie Kampan/Lea Sibertin Blanc were second and Clara Addari/Arianna Perini (ITA) in third, with matched finishes to Evangelina Drouga/Eva Vardali (GRE) and Paulina Fauroux/Anel Ponthieu (FRA) in the blue fleet.

But the day belonged to Spain’s Silvia Mas/Marta Davila, who ten days ago won the ISAF Youth Worlds with a day to spare, and again have demonstrated their consistent form with a fourth in race 1 and then bounced ahead to a win rewarding them with pole position in the 84-boat 420 Ladies fleet by 1 point.

Racing Schedule for Tuesday 29 July
Racing for the 420 Open and 420 Ladies is scheduled to start at 1300 hours with 2 races for each fleet. The blues fleets will start first, followed by yellow.

About the 2014 420 World and Ladies World Championships
The 2014 420 World and Ladies World Championships, 25 July-3 August 2014, is being held on the Priwall Peninsula off Travemuende, organized by the Lübeck Yacht Club in partnership with the German 420 Class Association, Deutscher Segler Verband and the International 420 Class Association.