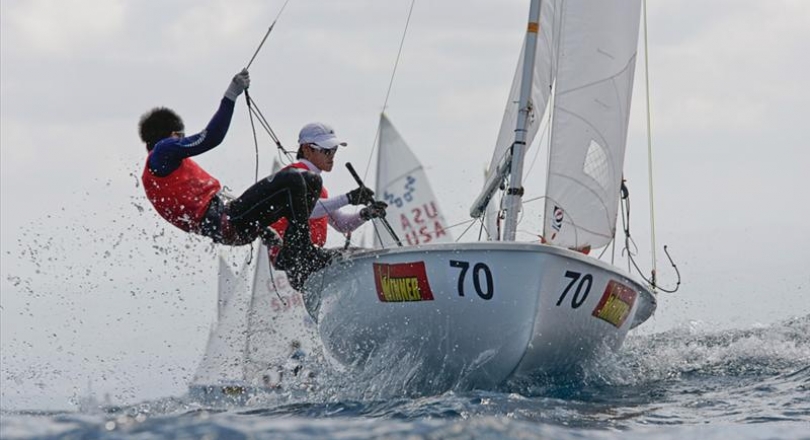 This news belongs to
2010 420 World Championships
ALL EVENT INFORMATION

The International 420 World Championships were held at the Port of Haifa, organised jointly by the Haifa Municipality, Haifa Sailing Club and the Israeli Yachting Federation, in conjunction with the International 420 Class Association, from 22 - 31 July, 2010. 160 boats, 320 sailors from 6 continents competed. The Championship coincided with a year of celebration of the 50th anniversary of the launching of the first 420 and the first Class Association. Launching from the Hashaket Beach, the 'quiet beach' (at least until the 420s arrived!), the event benefited from recent modernisation and improvements to Haifa Sailing Club, supported by Haifa Municipality.

The conditions were excellent, from training and practice and throughout the first two days of racing in the Qualifying Series. Competitors, coaches and the Race Committee expressed delight at the conditions, mostly winds of 17 - 22 knots with long waves, that many sailors found exhilarating downwind. For all on shore, the sun was hot and quite humid, so maintaining hydration was a priority. This venue provides long hours of relatively assured wind, and the choice was made to run the racing for both fleets on the same course, alternating Open and Ladies' morning and afternoon. Many sailors commented on the contrast with other events at which waiting on shore and lost races have been part of their experience.

Day one of the final series was pretty challenging for the Race Committee and the sailors alike. All parties puzzled into the night about the causes of what had been happening on the water. With a very large number of general recalls, in some cases with most of the fleet across the line at the start, and recurrent recourse to the black flag, this was a difficult and long day. In race two of the Open gold fleet there were 19 boats black flagged, and 11 in the Ladies gold fleet race three. With a plea from the Race Officer to the sailors at the following morning's Coaches' Briefing to exercise restraint, there was not one general recall on the second day, only one postponement and any OCS's were handled individually.

The remainder of the final series was sailed with somewhat reducing winds that tested the sailors skills and provided rounded racing conditions for a World Championship.

Justin Liu & Sherman Cheng were the clear winners of the Open Championship, with a 21 point lead. This team has been well-known on the 420 international circuit since they were the overall winners of the Junior Europeans in Medemblik in 2007. This year they had already won the Kieler Woche; that event and the Worlds are selection events for Singapore team places at the Asian Games in November. As reigning 420 Champions at the 2006 Doha Asian Games, they are very keen to defend their title in China. Usually known for their serious, professional concentration and very focussed approach to their sailing, Justin came off the water with Sherman after the last race showing rare exuberance, he was 'overjoyed'.

"We have been working for this for four or five years. Especially after the disappointment of our 4th at last year's ISAF Youth Championships in Brazil, this is very satisfying. All credit must go to our coach, YQ, who has trained us over the last four years, a major reason for our improvement so far".

Sherman added his happiness at this achievement after five years of hard work, making a particular point of thanking their schools, family and friends for all the support they had been given.

The Asian Games in November will be the next key engagement for the pair, but maybe their last in the 420. We had caught up with them earlier in the Championship, when Justin had talked about the future. Probably army service would come first, but they hoped that they would be sailing in the 470 soon, and a future Olympics was clearly in their sights. Meanwhile, winning the World Championship evidently brought great satisfaction to this hard working team.

Roberto Caputo & Bernedetta Barbiero (ITA) did not need to race the last race to win the Championship, but they did. It took some time to reach the shore because their team mates wanted the celebrations to start in the water! Having already gained silver and bronze medals in the Open gold, the men were very excited and quickly took over girls' boat, to be followed by impromptu photo shoots with all the Italian sailors surrounding the Ladies Champions still not on shore! Roberto could only say, "we do not believe it, it is only just sinking in".

The leading Italian Women's team, fourth in a strong national ranking list, had led the Championship in the Qualifying Series, and were now joined by Christina Celli & Silvia Morini in bronze. The Italian women's strength had been further demonstrated in the silver fleet, where, for several days, four Italian teams had dominated until Annabel Vose & Megan Brickwood (GBR) had managed to join winners, Ilaria Paternoster & Benedetta Di Salle and Elena Berta & Giulia Tisseli on the podium.

With all these podium places, the Francis Mouvet Trophy for the team with the highest placed three teams at the Championships was bound to go to Italy. We noticed that Head Coach, Ricardo de Felice (helm of the youngest crew at the 1998 Palamos Worlds) and his coaching team were not shy about showing their enthusiasm for the outcome of great Championships.

We were able to catch a word with the crew of the Open gold fleet winners of the William Sanchez Trophy (16 and under), Gal Cohen & Hadar Moran of Israel. Hadar said that they had hoped to achieve a top 20 ranking (his helm, Gal, is still 14), but their 6th place overall had been a great boost to their confidence. Only out of Optimists six months previously, this was certainly a great achievement and gave us an insight into the approach of the Israeli Clubs in encouraging young people into sailing and spotting talent at an early stage. From Tel Aviv, Hadar, as a youngster, had originally participated in a children's summer camp and had been spotted for his potential. Coming from a non-sailing family, the training run from the Club had formed the basis for the success of this team at this their first international event in the 420.

For some of the sailors at this event, this was a return to their favourite boat - we had several 470 sailors competing - and for others represented the pinnacle of their 420 careers as they move on to sailing in other boats - several were straight off to Tel Aviv to train for the Women's Match Racing at the forthcoming Olympic World Cup Sail for Gold Regatta at Weymouth. But for many of the Fleet and their support teams, they were packing up containers late into the night in preparation for the Junior European Championships to be held jointly with the 470 Junior Euros in La Rochelle next week. And there were many sailors talking of their campaigns for selection for the 2011 World Championships to be held in the New Year in Buenos Aires, Argentina….not least the South American sailors, who were planning their challenge to their friends across the world of the International 420 Class.