Patience earlier in the week turned to raw energy out on the race track on Championship day 5 in Sanremo as the breeze kicked in. A forerunner to what looks likely to be epic "big breeze" conditions tomorrow.

The breeze has tested the patience of the 524 sailors from 24 nations over the preceding 4 days of racing at the 2016 420 Worlds. Light conditions put a focus on winning the starts to get clean air and stay ahead, but today the race strategy and game plans changed as the breeze hit 12-15 knots, and boat speed came to the fore.

Three races for each of the 420 Ladies and U17 fleets, and two for the 420 Open delivered some leaderboard shuffles. But no podium places are certain. With just one day left to settle the scoreboard, Saturday looks set to be an epic finale.

Who will sail the race track of a Champion? The wind is stepping up, and the final 2 races for the 420 Open and Ladies and 3 races for the U17 fleet will be a battle of physical and mental resilience to decide the podium order.

As well as the medals and Championship trophies – also up for grabs is the overall nation trophy, the Francis Mouvet Trophy. Japan are current holders of the Trophy, from their dominant performance at the 2015 Worlds, with the new leading nation to be confirmed tomorrow. Spain holds the advantage right now, with Italy and France chasing close.

420 OPEN
Despite their worst day of racing, a 12,52 scorecard for series leaders Theo Carayon/Erwan Lucas (FRA), this team stay on top. They discarded their 52nd place finish in race 10, and earlier consistency holds them with a 10 point advantage at the top.

Teams representing eight nations in the top 10 heading into the final day of racing, and just 31 points separating them, is testament to the quality of this worldwide fleet.

Unable to match the pace set by their rivals today, Jim Vincent/Victor Mas, series leaders earlier in the Championshp have plummeted to 9th overall, from a disaster of a day, scoring 42,33 finishes.  Their points deficit is certainly not impossible to reverse, but whether they can revitalize their performance is the question.

420 LADIES
The battle for victory is set to go right down to the wire in Saturday’s two races. María Bover Guerrero/Clara Llabrés (ESP) hold a 9 point advantage over Italy’s Francesca Russo Cirillo/Alice Linussi, with third placed Maria Vittoria Marchesini/Cecilia Fedel (ITA) another 9 points behind – but anything can still happen.

Great Britain’s Isabel Davies/Gemma Keers claimed their first win of the series, in race 1, helping them to shift up to 11th overall.

420 U17
With 15 points separating series leaders Telis Athanasopoulos Yogo/Dimitris Tassios (GRE) and Spain’s Eduard Ferrer/Carlos De Maqua, there is still plenty of room to manoeuvre, with nothing yet decided.

A jump in form from Thomas Andre/Justin Baradat (FRA), claiming a win in race 8, promotes them to 11th overall. 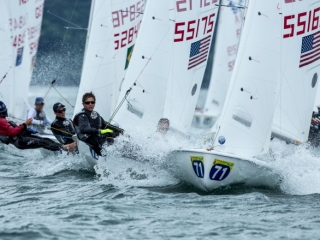