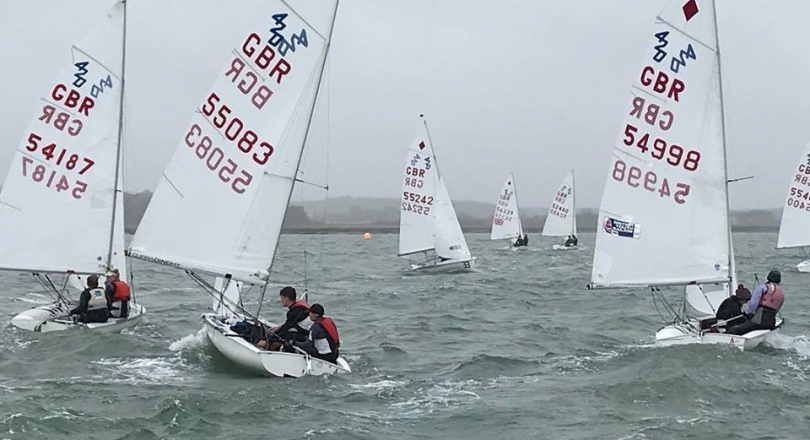 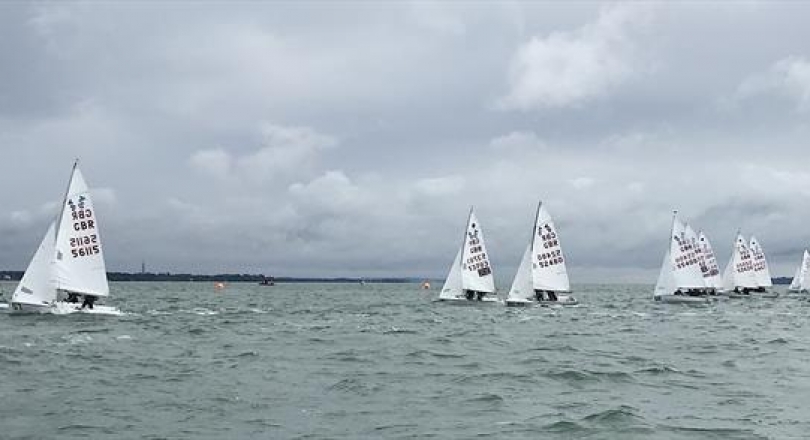 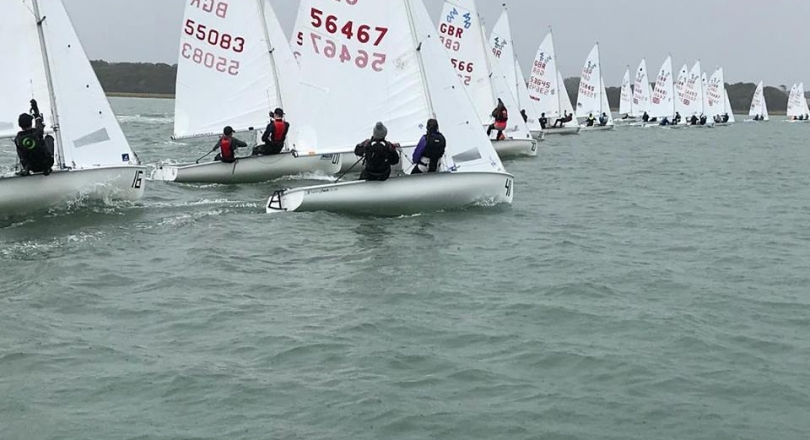 The Royal Lymington Yacht Club hoted the cream of British 420 sailnig over the weekend of 22-23 September for the 2018 British 420 Autumn Championships.

This news belongs to
2018 British Autumn Championships
ALL EVENT INFORMATION

Earlier in the week the forecast had a "biblical storm" on the cards which wasn't enough to deter teams travelling from all over the country to descend upon the venue. To describe the weather conditions on Saturday as "a little damp" that would be fair, it isn't often that it rains from 9am until 9pm!

With multiple weather fronts passing by the wind ranged from 0-17knts throughout day one. Our excellent race team lead by Roger Wilson and Adrian Stoggall attempted to get racing underway with the expected drop and shift to a more easterly direction by midday. Unfortunately race 1 was abandoned due to the wind dropping, the fleet were held afloat under postponement until the new breeze arrived.

After a short wait the new breeze came and racing could commence with 10-17knts. Tide was a big factor to consider during the racing and local Hero's Vita Heathcote/Milly Boyle were quick out of the blocks on day one scoring 1,1,1,6 to take the overnight lead. A number of new pairings also impressed on day 1 with lots of fresh faces taking some fantastic race scores from the day.

Due to the strong tide the fleet were tested with different race formats with one of the biggest changes being a starboard rounding of a trapezoid course.

The sailors adapted well and some excellent rule observance was commented on by the class Jury David Brunskill. 6-7 hours on the water and 4 races completed meant for some soggy and hungry sailors (and rib crews!) but with the ominous forecast the race team were keen to push the fleet to the limit on day one.

An AGM followed racing on Saturday with a number of new committee members & Sailor reps were selected to maintain the excellent work going on in the background of the 420 class.

Day two dawned and the rain was still with us, the conditions in the morning were 16-18knts with the chance of a building breeze. The race team got the fleet launched ASAP and tried to get the rest of the series complete before the breeze built to much. New race leaders led the way on Sunday with Megan Ferguson/Bee Harris doing a "horizon job" to seal a very impressive bullet in race 5.

With the breeze increasing throughout the morning there were a few gear failures starting to creep in, one to note was our national champions Rhys Lewis/Drew Wright, whilst running in the top 5 in race 5 their jib wire snapped which meant Drew became a human teabag! But the camaraderie within the fleet meant that the boys found a spare wire and made the repair for race 6 if not a little late for the go!

By midway through the sixth race we had gusts into the high 20's and a number of teams choose to have a little dip which lead the race team to decide that race 6 would be the last. Race 6 had a exciting final run in the big breeze with Haydn Sewell/William Heathcote battling it out with the new pairing of Eleanor Keers/Faye Chatterton, it came down to the last gybe on the final mark. The boys took the race win but big smiles from all as the sailors crossed the line and heading by to lymington for some tasty pasta waiting ashore!

The overall victory was secured by Vita Heathcote/Milly Boyle with thanks in their speech going to their "Sick club of Lymington" and all involved in the organisation of the event.

A great weekend of racing in some challenging conditions! Next up for the 420's is the re-run of the Inland Championships at Rutland Sailing Club on the 20-21 October.