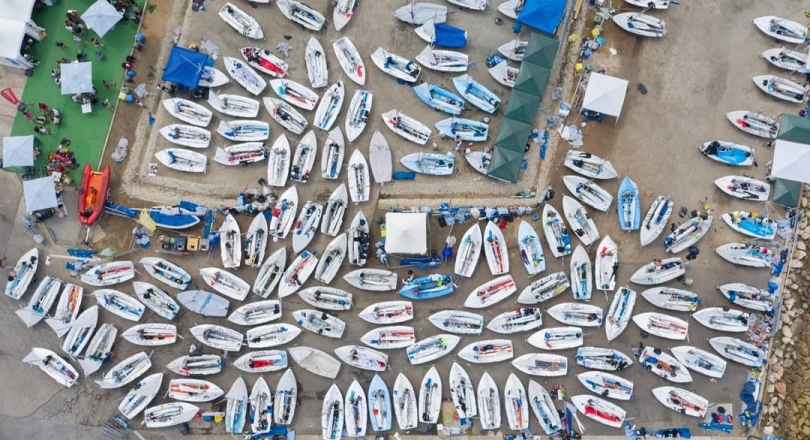 A day of patience was asked of the 456 sailors competing at the 2019 420 Worlds in Vilamoura, Portugal as the wind played a waiting game on race day 5.

So far, the second half of the 2019 420 World Championship has been in total contrast to the first half, as the 3-day qualification series featured exceptional breeze and waves, compared to the final series which delivered light breeze yesterday and ‘nada’ today.

To make up for today’s lack of racing, the final day of the Worlds on Thursday 11 July will feature a packed programme, with 3 races scheduled in order to achieve an 11 race series. Racing is scheduled to start at 1200 hours on the two course areas.

Thursday will determine the gold, silver and bronze medals in each of the World Championship fleets. The leading teams though have nailed the race track whatever the weather, and tomorrow is make or break with a light day forecast in the morning, building to a breeze between around 1300-1600 and then dying off in the late afternoon.

In the battle for the top placed nation, Spain is looking strong. The Francis Mouvet Trophy is awarded to the nation who has the highest placed 3 boats in the Worlds, across the Open Women and U17 fleets. Spain has a long-standing pedigree in the 420, winning the Trophy every year since 2012, except 2015 when Japan took the honours.

The overnight top 10 leaderboard remains for the Open, Women and U17 fleets.

420 OPEN
Seb Menzies/Blake Mcglashan (NZL) have dominated the 89 boat fleet from the outset, so hard not to predict these two defending their 2018 420 Worlds title and scooping the gold medals. They won last year’s 420 World Championship comfortably, and so far this year hold wins in 5 out of 8 races and a 10 point advantage over the second placed team. The door looks open for the gold medals, but anything can happen in a three back to back race day and the pair is well aware of their 20 point discard score.

Behind Spain’s Nacho Davila/Javier Mestre (ESP), the third and fourth placed teams are on a 36 point tiebreak, with Martin Wizner/Pedro Ameneiro (ESP) and Luís Niza/Paulo Baptista (POR) neck and neck sitting on the same total points and net points as each other, and both have a 46 point discard.

The next three teams, placed 5th to 7th are also on tiebreak. It’s going to be an exciting final day.

420 WOMEN
Great Britain’s Vita Heathcote/Milly Boyle edged into the series lead after day 4 and sit in a strong position as the only team with an all top-10 finish scorecard and a safe discard of 7th.

Only 10 points separate the teams placed 2nd to 7th and behind there are plenty of teams who have already proved their form with front of fleet racing, so plenty of opportunity to buck the leader board line-up.

There is plenty of unfinished business in the 73 boat Women’s fleet and plenty of talent capable of seizing the points in Thursday’s podium deciding three races.

420 U17
The Greek partnership of sixteen year old Odysseas Spanakis and 15 year old Konstaninos Michalopoulos established themselves as favourites from the start, eating up the leaderboard with six race wins to date.

Behind the Greeks, Ange Delerce/Timothee Rossi (FRA) have been locked in second place, with a points gap to the third place German team of Florian Krauss/Jannis Suemmchen, and the rest of the top 10 all close in points.

Leading the charge in the women’s U17 is Neus Ballester/Andrea Perello (ESP) in 5th overall, with Elena Sotiriou/Eleni Giannouli (GRE) in 9th overall and Vanessa Lahrkamp/Katherine Mcnamara (USA) in 12th. 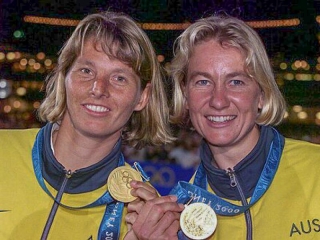