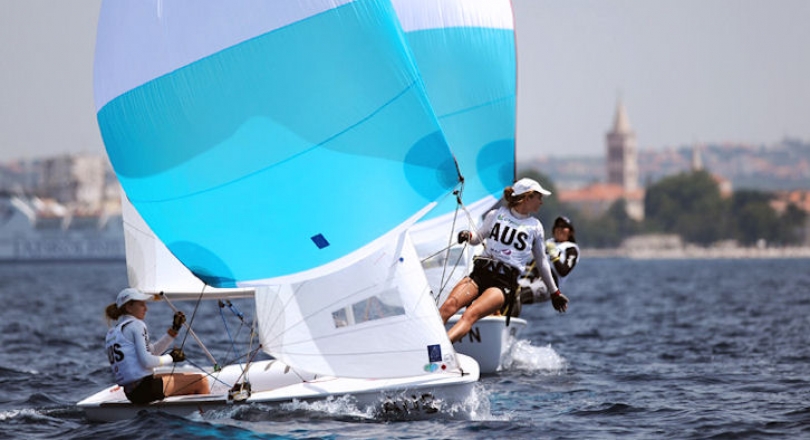 Australia has a proud history at the ISAF Youth Sailing World Championships and is set to send a strong team to the 2012 event to be held in Dublin, Ireland, from 12-21 July.

Carrie Smith and Ella Clark will be making their second appearance at the Youth Worlds with the West Australian pair finishing just off the 420 class podium in fourth last year.

Smith and Clark will not only be a year older at the 2012 event but will also bring a lot more experience to their racing having competed at the recent Perth 2011 ISAF Sailing World Championships in the larger 470 class of boat. The pair said that they took a lot out of competing in a World Championships on home waters and are now looking forward to fighting for a podium position in Dublin.

Tom Klemens and James Oliver will contest the 420 boy's class with the Victorian pair heading to their first Youth Worlds together since teaming up last year.

The pair were fierce rivals in the past when competing in junior classes and gelled instantly as a team in the 420, making their international debut at the 2011 420 European Championships in Portugal. The pair were first youth and third overall in the Australian 420 Nationals and then won the OAMPS Australian Youth Championships – first Australian male. Tom, who is a member of the Sorrento Sailing and Couta Boat Club, will be the first member from the club to compete at the ISAF Youth Sailing World Championships.

Team members in the other events are:

New South Wales multihull skipper Paul Darmanin will be competing at his third straight ISAF Youth Worlds, having stood on the top step of the podium at his first appearance in 2010.

Darmanin will be sailing at the ISAF Youth Worlds with a new crew in 2012, teaming up with fellow Northern Beaches sailor Lucy Copeland. The two have sailed together in the past, racing in the Manly Junior class as a crew and teamed up again last year to campaign towards the 2012 ISAF Youth Sailing World Championships.

The final member of the 2012 Australian Youth Sailing Team returning for another appearance at the Youth Worlds is New South Wales windsurfer Annalise Gilbert.

Treharne was unstoppable at the recent OAMPS Insurance Brokers Australian Youth Championships, winning nine of the 10 races in Brisbane.

Australia will be represented in the 29er fleet by Queenslanders Tom Siganto and Joel Turner who were consistently at the front of the fleet at the recent Australian Youth Championships, winning five of the 10 races and never finishing outside the top six.

West Australian sailor Mark Spearman will represent Australia in the Laser Radial boy's class at his first ISAF Youth Worlds though it won't be the first time that Spearman has sailed for his country, having raced at the Singapore 2008 Youth Olympic Games.

The team will be supported by three coaches with Brendan Todd, Tessa Parkinson and Ben Callard all making the trip to Dublin.

Brendan Todd will be the team leader, 29er and RS:X coach and has success as an athlete and coach at the ISAF Youth Sailing World Championships. Todd competed at the event in 1989 and 1991 in the windsurfer class, winning Silver in 1991, and returning as a coach in 2000, 2001 and 2005. Todd also represented Australia at the Atlanta 1996 Olympic Games where he finished eighth.

West Australian Tessa Parkinson will coach the 420 and multihull classes, having won Gold at the event in the 420 class with Elise Rechichi in Poland in 2004. Parkinson and Rechichi went on to win Gold at the Beijing 2008 Olympic Games in the 470 class.

Ben Callard will coach the two Laser Radial classes with the Queenslander having worked closely with both Mark Spearman and Louise Evans in the past. Callard was also the coach of the Australian team at the Singapore 2010 Youth Olympic Games.