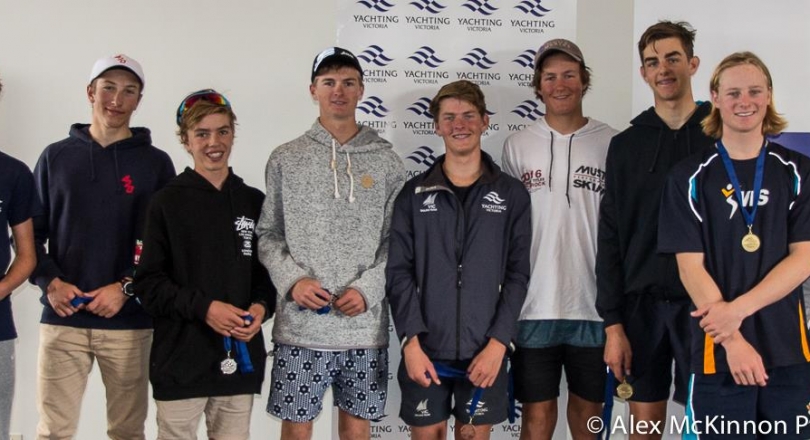 Blistering win by Sharman/Grogan at Victorian Junior and Youth Championships

A standout performane from Nicholas Sharman/James Grogan saw the pair sweep the scoreboard at the Victorian Junior and Youth Championships hosted at Mornington Yacht Club, counting 6 wins from 7 races.

The two day series, 9-10 April, saw the twenty-one boat 420 fleet racing on Port Philip Bay, Melbourne in a showcase of youth sailing for ten different youth classes. The event attracted over 150 boats, 190 competitors and more than 200 parents, volunteers and coaches.

The 7 race series fully tested the skills that each athlete had learned over the previous few days of coaching clinics with conditions varying from 0 knots on Saturday to gusts of 23 knots on Sunday.

Hayden Harding/Casey Bates claimed the opening race win, the only victory not seized by Sharman/Grogan, ending the event in fourth overall. A consistent string of top 10 finishes placed Josh Berry/Henry Haslett in second overall and James Hackett/Ethan O'Brien in third.

Along with the winners in each Class, the 2016 Victorian Sailing Team was announced, recognizing the sailors who have earned some outstanding results and committed themselves for the next season to high performance sailing. The 420 Class scholarship holders for the 2016/17 season are:

Great to see many of these teams will be competing at the 2016 420 World Championship in Italy.