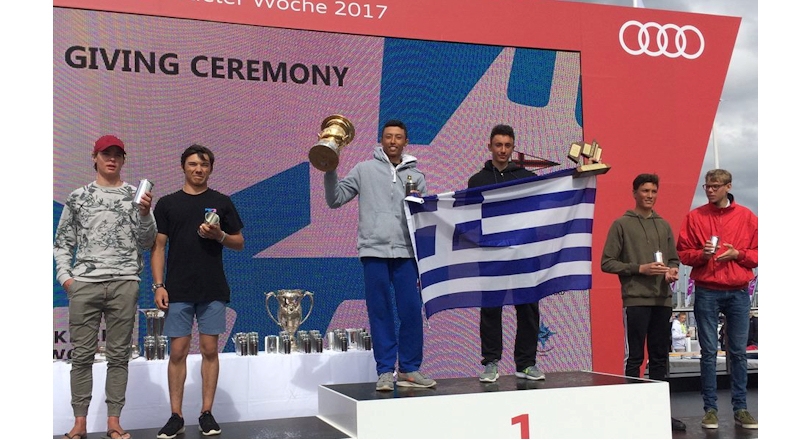 The reigning 420 U17 World Champions, Telis Athanasopoulos Yogo/Dimitrios Tassios of Greece took out an impressive victory on Sunday 25 June against a fleet of 153 teams racing the 420 event at Kiel Week in Germany.

This news belongs to
2017 Kieler Woche
ALL EVENT INFORMATION

The Greek partnership'sr pedigree is strong, with a silver medal also in their hands from last year's 420 Junior European Championships, and were amongst the favourites at Kiel Week.

The 134 boat line-up was split into three fleets for the 10 race series, with Athanasopoulos Yogo/Tassios claiming wins in races 1 and 2, before dipping to 2nd place finishes on day 2, going on to wrap up their qualification series with three race wins. The top placed 45 teams advanced to gold fleet racing, where Athanasopoulos Yogo/Tassios raced a consistent 3,5,5 scorecard to easily take the victory over France's Enoz Balanger/Gaultier Tallieu. Third to Germany's Lennart Kusss/Paul Arp.

Up next for many of these teams is the 2017 420 Open European Championship in Athens, Greece, 22-30 July. Athanasopoulos Yogo/Tassios will be racing at their home club, and having weighed up some of their competitors during Kiel Week, will undoubtably have another victory in their sights.