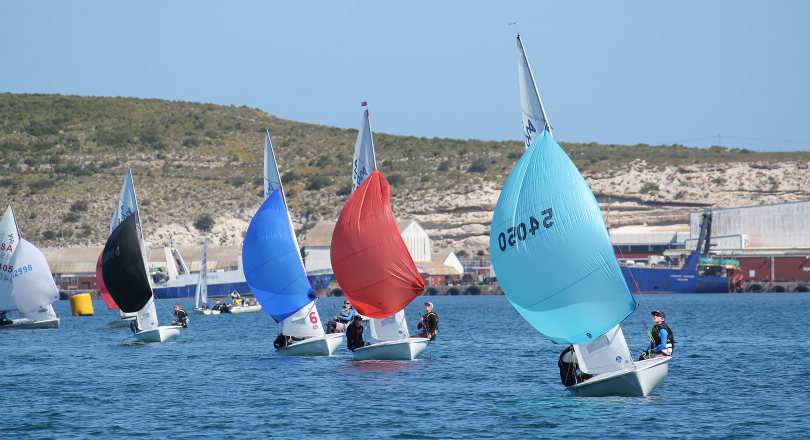 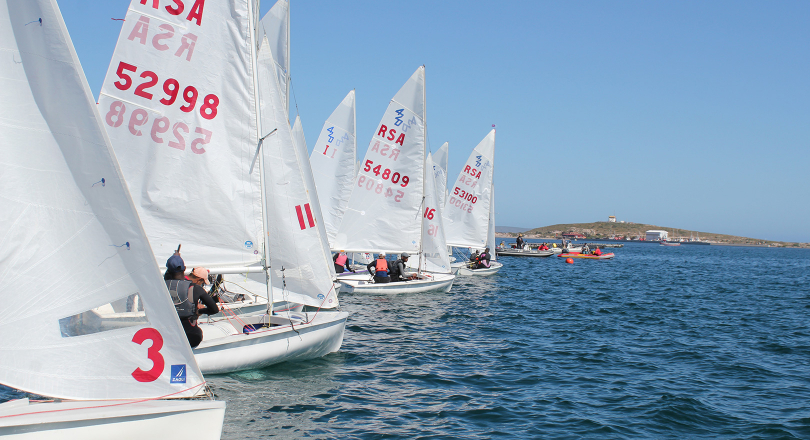 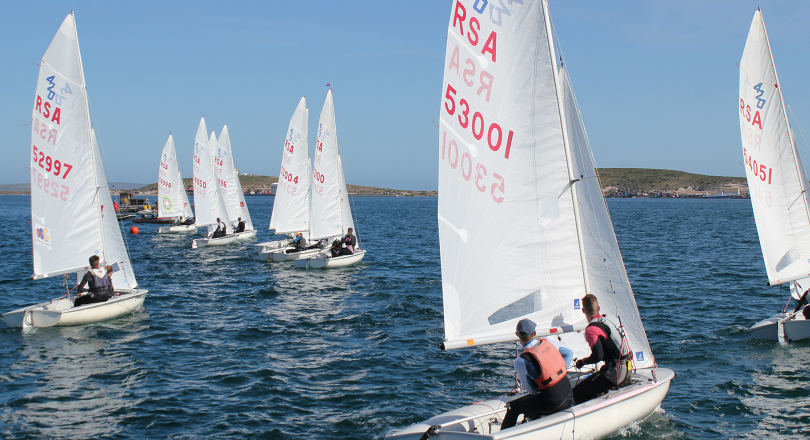 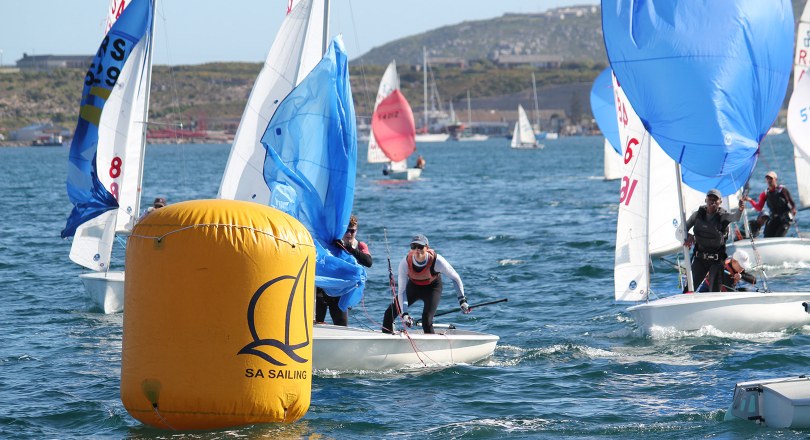 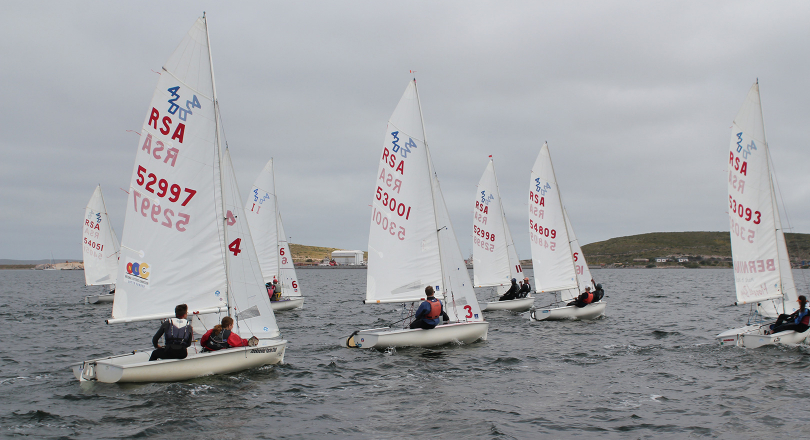 This year, for our Championship we moved camp to Saldanha Bay Yacht Club.

Our Sponsor for the event was AMT (Advanced Material Technology)*.

For the past 3 Championships the 420 class had always sailed on inland waters, and it was time to take the event to sea.

Typically the Class loses 2 participants every 100 Km that we move away from Zeekoevlei, which remains the epicenter of all things 420 in South Africa. It therefore came as a pleasant surprise that despite Matric exams, Covid scares, and sewerage problems in three of the Cape Town clubs, we still had 14 boats attending. We missed the Mossel Bay crowd, who always attend, but this year were committed to a 29er event and decided not to make the trip.

There were quite a few new pairings, which included some newcomers from the Optimist class. For most teams the ultimate goal was to beat the defending National Champions Ross Mackinnon and Alex Falcon. It was a known fact that Ross and Alex did not do a lot of training this year. Cape 31 commitments, 470 training and Matric preparation limited their time on the 420. They are not the skinny kids that won the 2018 and 2020 Championships anymore. At 145Kg combined weight they must now be the heaviest team around. When the weather forecasts a week or so before the event started confirming a light wind regatta Tristan Tomlinson, Hamilton Slater and Howard Leoto started to think they may have a shot at winning this year’s event.

While Tristan’s regular crew Thom Raynham was studying and unavailable, a much Lighter Jack Cummings was selected to replace him, Jack is an Optimist sailor, but he is no stranger to the 420 class, having learned to sail the boat at the last Masters and Apprentices, an annual regatta where experienced 420 sailors must pair up with a 420 newbie.

Another Masters and Apprentices acquisition for the class is Blake Madel. Blake is a very young but determined Optimist sailor. He won the Masters and Apprentices regatta and knew he could do well in the 420 Nationals. He called up Hamilton Slater, serial Dabchick national champion and experienced 420 bowman and a good team was put together.

With Matt Ashwell also studying hard, his regular crew Rivaldo Arendse was happy to merge skills with Theo Scheder Bischein. This was a good team. Theo had previously sailed with Hamilton, who in turn had sailed with Alex, so there has been some skills transfer down the chain, and Rivaldo has won a 420 National Title. These guys were not going to Saldanha to have a holiday and enjoy the sunsets.

Howard Leoto teamed up with Lance Curtis. While Howard was in Switzerland winning the Star Sailors League, Lance came upon an old brand new 420 tucked away in some warehouse. It was probably parked there more than 10 years ago after having been used very little, and it looked fresh out of the factory. With their combined experience and skills and the newest boat in the fleet this team had a very good shot at the 420 title that Howard has been chasing for many years.

Another contender that wanted to beat Alex was Heidi Burger. For a few seasons, almost ten years ago, Heidi was struggling to teach a younger Alex Falcon how to roll tack his Optimist, or how to hold the tiller extension, and had to finally accept that Alex would only ever be a Cruising boat sailor. She enlisted her regular crew Mike Mc Iver to come and remind Alex and Ross who taught them to sail.

With such strong contenders for the title no result could be a foregone conclusion.

Furthermore, the light winds could favour some of the younger crews. Elisa Falcon and MaxCilliers could pose a threat to the top teams just as much as the two Chiaras or the other Sailing Centre sailors.

Neil Armitge was our Race Officer, and Dave Hudson was Remote Protest Chairman.

We traditionally sail a practice race before the Championship gets underway, but this year we decided against it. The practice race benefits the Race Committee more than the sailors and we thought that it would be better to get the races underway as soon as possible if we wanted to complete 4 races on the first day. A long postponement while waiting for wind on Friday meant that the races, starting procedures, mark laying had to happen like clockwork. Neil was very fast in positioning his courses and getting races underway. At the end of the Friday all 4 planned races had been completed in wind that never exceeded 8 knots and required some marks repositioning inbetween races.

The first 4 teams all had a first on their results sheet, and despite the fact that Ross and Alex were laying first, there was no guarantee that this would still be the case at the end of the following day. Howard and Lance were only a handful of points behind, with Tristan and Jack laying third. Heidi took the last win of the day, but anyone of the first 6 was still in contention for the title.

The second day opened again with no wind and postponement was hoisted on shore almost right away.

A proposal was made to try and run 5 races on this second day, when the wind would fill in. The proposal was immediately rejected by the heavier crews who were hoping for stronger winds the following day. When the wind finally came in and settled it was not dissimilar from the Friday. 4 races were still possible in 4 to 10 knots. Once again competition between the first 6 teams was even.

Howard and Lance were having a spectacular day, they were leading by half a leg the second race, after having won the first race of the day, when the jib halyard broke. They had to retire from the race, using their first discard and now had to carry one of their 5th places from the first day. They jury rigged the sail for the last two races, but the groove they had been in was gone and Ross and Alex took the last two bullets.

Although mathematically quite a few teams were still in the position to win the championship, realistically the showdown was going to be between the defending duo and Howard – Lance.

The Sunday morning started just like the previous two days, little wind, switchy and from the wrong direction, nothing like the forecast. Again postponement went up and the waiting game began.

With all this time on hand Alex and Ross started doing some calculations and established that one third place and a discard were sufficient for them to retain the title.

With that being the mission of the day, when the racing finally got underway they did not bother too much to chase Blake and Hamilton. In the lightest breeze so far Blake was unstoppable and won the first race of the day followed by the new 2021 National Champions Ross Mackinnon and Alex Falcon.
In a new development of events Howard Leoto and Lance Curtis must have lost focus for the day, because Tristan Tomlinson and Jack Cumming took two third places on Sunday, leaping to 2nd place overall. The second victory of the final day went to Blake Madel – Hamilton Slater who climbed to 4thplace overall, overtaking Theo Scheder Bischein – Rivaldo Arendse.

Theo and Rivaldo are the only team in the top 6 who did not take one race victory, They consistently sailed between 2nd and 5th, discarding two races worse than 5th.

Heidi Burger and Mike Mc Iver could not maintain the speed they had on the first day and finished the last two races with a 6th and a 7th, completing the event in 6th place overall, 1st Mixed crew.

Elisa Falcon and Max Cilliers, two Optimist veterans and 2nd U17 in 2020, followed in  7th place overall, 2nd Mixed crew and winners of the Tomlinson Trophy for first U17.

Second U17 team and third mixed crew were James Matchette with Olivia Purchase on the wire, finishing 8th overall.
The ZVSC senior teams of Jemaine – Luciano Almano and Amir Yaghya – Jody  came in respectively in 9th and 10th place followed by the first all-girls team of Chiara Fruet and Chiara Ross in 11th place.

In 13th place overall Eve Gardiner, from the bow led her new helmsman Graham to their 4th place in the mixed crews.

Last and 14th place went to Anna SchederBieschin and Savanna. This team was the 2nd all-girls team and was assembled 2 days before the beginning of the championships. The learning curve for this duo was steep throughout the event, and we are sure that in the future they will move up in the results sheet.
The National Championship also incorporated the Youth Nationals results for the 420 Class. Every December, when Youth Nationals time arrives, the 420s lose quite a few sailors to the Optimist, Dabchick and Laser classes. It was therefore decided to take the U19 results from the Class Championships. In their final Youth year, Ross Mackinnon and Alex Falcon won the U19 category, followed in 2nd place by Blake Madel and Hamilton Slater, trailed by Theo Scheder Bischein and Rivaldo Arendse in 3rd place.

The U19 category was not the only new feature at this championship. With World Sailing encouraging and enforcing more frequently the mixed classes (Volvo, Nacra 17, and now the 470) we thought it appropriate to acknowledge this category. The 470 Olympic Regatta in Paris 2024 will be sailed by mixed teams, no more males and females categories like in Tokyo or Rio. The 420, internationally, is the feeder class to the 470 and we must follow the trend.

With so many categories deserving prizes nobody went home empty handed. Master of Ceremonies for the prizegiving was Sara Falcon, who was also Regatta Secretary and the person behind the organization of this year’s event. She made sure that everybody had their minute of fame on the podium.

Pictures and results sheets can be found here:
https://www.facebook.com/420sailingsouthafrica/
https://photos.app.goo.gl/p8My3xVvu8fLvKaN7

* AMT supplies the aerospace and marine industry with a wide range of composite products, ranging from cores and fabrics to resins for the most diverse applications. If you sail a dinghy or a yacht that was built in South Africa it most certainly has materials supplied by AMT in the structure. If it is built overseas, it will have materials supplied by companies that are represented in South Africa by AMT. If you have ever had to repair your boat, you will certainly have used materials supplied by AMT. To save our competitors some time on the next repairs, AMT supplied every team competing in the Nationals with a repair kit with some Gurit Resin, the trademark resin system for boatbuilders all over the world.  AMT does not only supply materials, it also provides expert advice and runs regular composite materials courses and workshops.