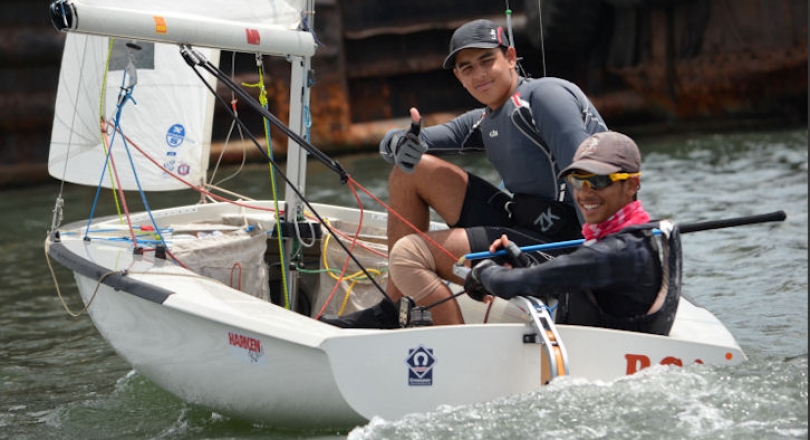 Race Day 5 at the Indian Coastal Nationals and when most others would have been fast asleep, participants of the 420 Coastal Nationals gathered at the Royal Madras Yacht Club, resolute and determined to perform to the best of their ability on the last day of the Championship.

In the two action packed races that followed, participants displayed their sailing expertise, gave each other stiff competition, and made it hard to predict who would go home with the trophy.

Upamanyu Dutta/Hussain Arsiwala (INWTC) were in fabulous form finishing first in the tenth race. Imolemnok/Ashok Kumar (INWTC) who have been giving the other participants sleepless nights with their consistent performance, finished soon after. Chennai girls Zephra Currimbhoy/Meaghanaa BT (RMYC) cruised past the rest of the fleet to make it to the third spot.

In the eleventh race, it didn’t come as a surprise that Upamanyu Dutta/Hussain Arsiwala (INWTC) kept up their winning streak by finishing first yet again. This time however, the women’s team of Zephra Currimbhoy/Meaghanaa BT (RMYC) worked magic with their boat and moved up to the second place. The RMYC team of Shiv Rekhi/Ankit George finished third to show that they too were not letting go of the title without a fight.

What is a race without excitement and uncertainty? The last day of sailing was thrilling and there couldn’t have been a better way to end the championship. Sailors proved that this is a sport where the tables can turn at any given point of time but what matters is being focused and holding your own even in times of adversity.

The stars of the day were the undisputed overall champions, Upamanyu Dutta/Hussain Arsiwala (INWTC) who truly finished the championship in style with two guns to their credit.

When asked about their phenomenal win, the two Bombay boys said, “It was a hard, windy day but we had fun sailing. It feels great to win the championship and we hope to sail here more often.”

Talking of their future plans, the promising team said, “We are going to Europe next week to train for a month and a half as we are looking at representing India at the Asian Games in 2014. Apart from training we will also be taking part in three championships- Kiel Week, Warnemunde Week as well as the 420 World Championship in Valencia.”

Racing at the Indian Coastal National Championships has taken place from 4-11 June 2013.