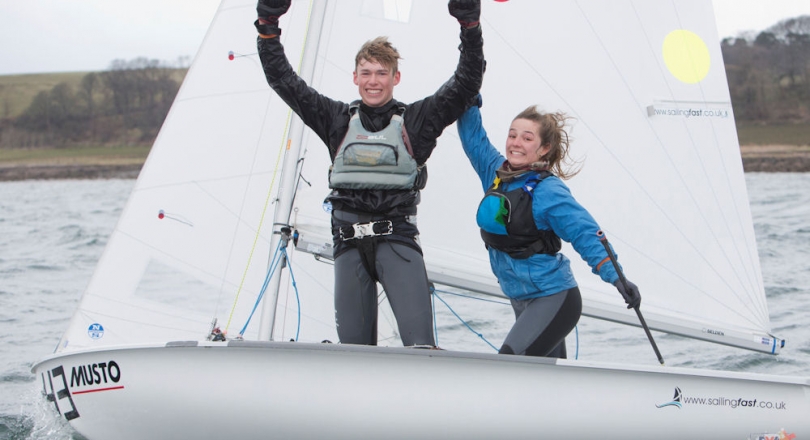 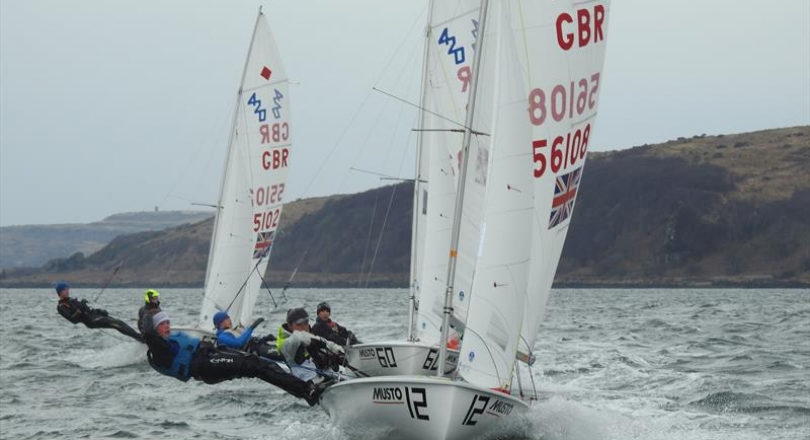 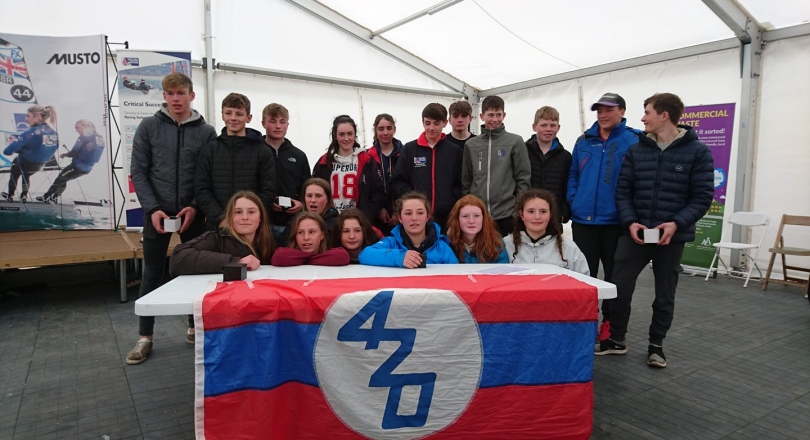 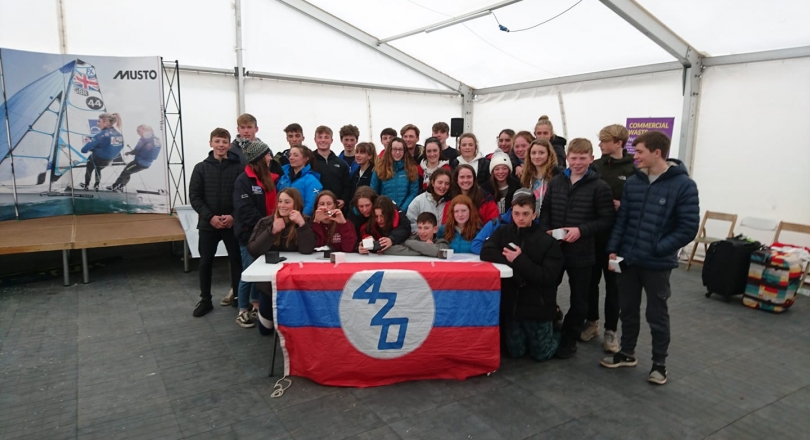 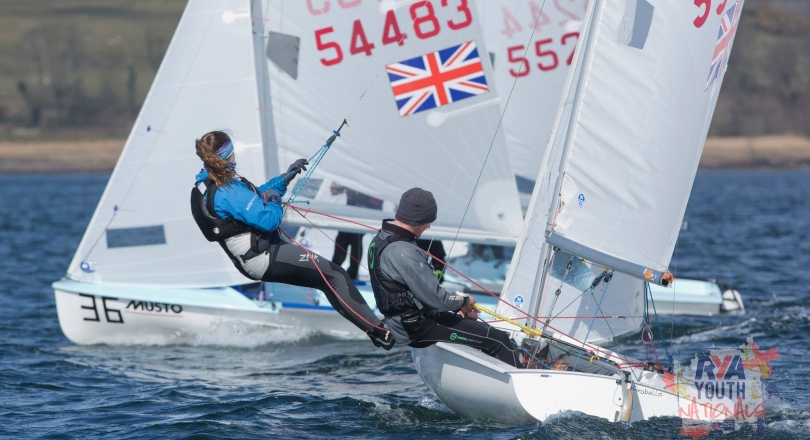 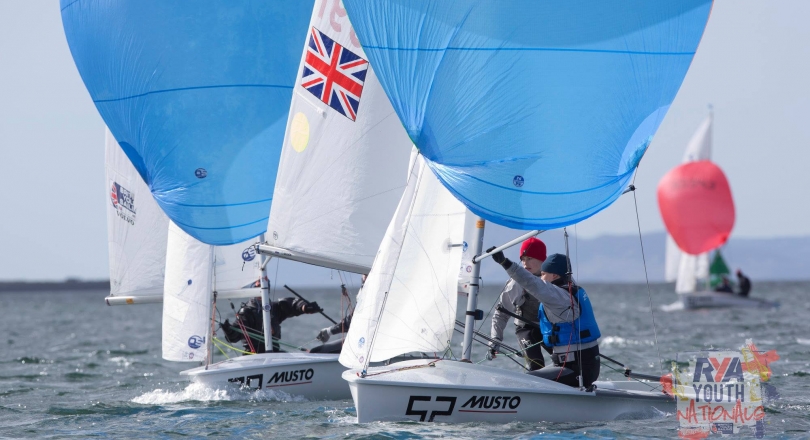 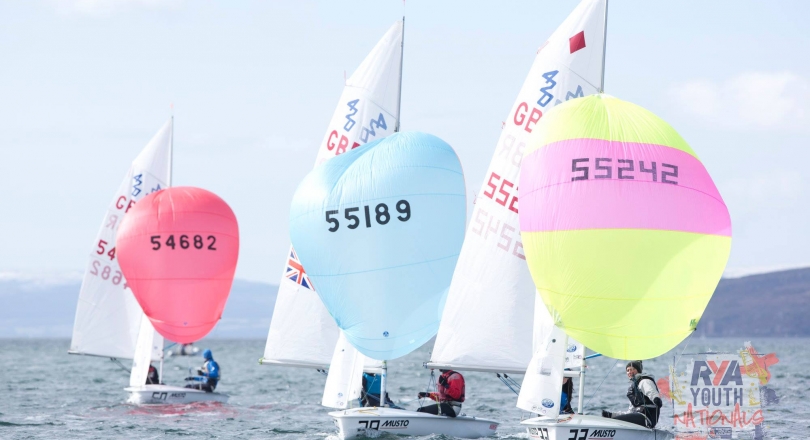 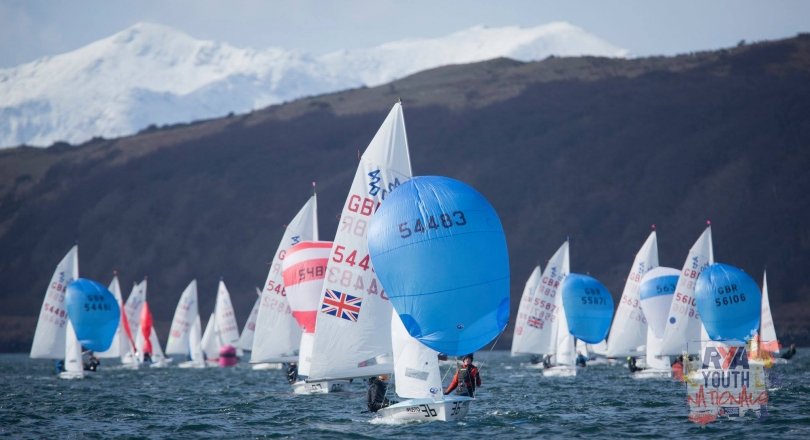 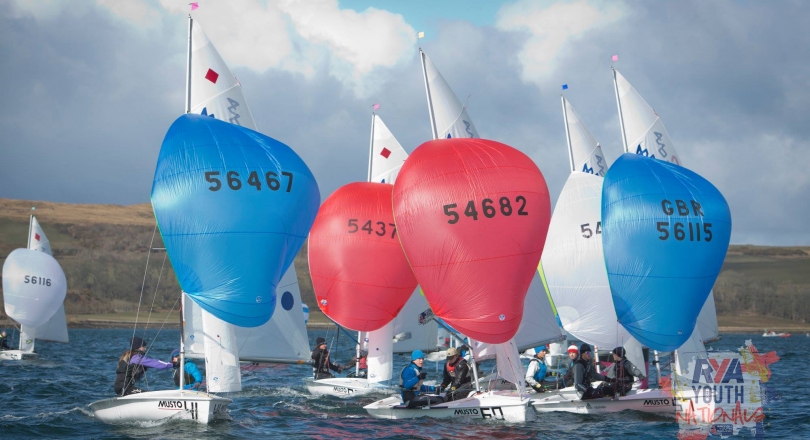 Twenty-eight teams made their way to Largs this year for the RYA Youth National Championships, 30March-6 April 2018, last run at the venue in 2013.

After a couple of days of profiling for all the sailors it was then onto boat measurement and relaxing with fellow competitors. Sunday brought some light winds and sun for some gentle practice which most sailors took advantage of. Calm before the storm I think! Whilst still cold it at least got most boats on the water getting familiar with the surrounds.

So onto the Championships. The first couple of days had looked challenging from the forecast reports, and yes, they were. Very windy, cold, and -7 wind chill. Indeed a bit wild! So no sailing for the first two days, which for some of the sailors at least gave the opportunity for revision for forthcoming GCSE's, A level's and Highers, although I'm not sure how many took advantage of this extra break!

Wednesday brought a slightly better forecast, still windy and cold (15 knots gusting to 25 knots) so the organisers got all the fleets out for a couple of races. For 420's they completed two races and it was neck and neck at the top of the leader board between the experienced Niamh Harper and Ross Thompson, and the youngsters Jack Lewis and Charlie Bacon both scoring a first and a second. Top ladies after two races were Charlotte Boyle and Georgia Baker with two solid 6th place finishes, although a couple of the top sailors were UFD's in these races including the eventual ladies champions Vita Heathcote and Milly Boyle.

So all to play for on day two of racing (day four of the Championship). Lighter winds and some easier sailing conditions delivered a long day on the water for all the sailors. Four races completed and a chance for consistency to start paying dividends, which Niamh and Ross appear to be very good at. Certainly the hallmark of champions. Moving up the leader board however were Rhys Lewis and Drew Wright along with Vita and Milly. Still cold and still challenging with some long waits between races as the Nacras used the course. Great to watch but it did mean waiting.

The final day of racing brought the wind back and two races scheduled. Testing conditions once more, not just for the sailors, but also for the mark layers and safety crews. The action started just a few minutes before the start with a collision and resultant capsize. This forced Ellie Clark and Lizzie Cattermole to retire just one minute before the first start with a sizeable 'hole' in the boat. Very disappointing for them although they got redress after a protest. Anyway, racing kicked off again, with Niamh and Ross really stamping their authority on the chasing pack with two firsts. Again some really impressive sailing. Across the rest of the fleet we had a couple of capsizes, which included some top boats and some increasingly cold sailors. Chasing the leaders we had Rhys and Drew with a 2nd and 5th, Vita and Milly with a 4th and 2nd, and Adele Young and Daniel Burns with a 6th and a mid fleet result.

“We were really excited for today as the wind was up and we love sailing in the strong breeze,” said Harper. It definitely showed on the scorecard.

Crew Thompson already had a taste of winning a Youth Nationals title when he took the same class title at the 2017 edition, and that played on new helm Harper’s mind throughout the regatta, “I had a bit of pressure as Ross won it last year and I didn’t want him to lose that title, but in the end it was all fine.”

So overall a very challenging week with the wind and cold conditions but some very impressive sailing not just by the top boats but by a few of the newcomers as well; including Katie Byne and Ellie Rush who got the top U17 girls prize. Jack and Charlie continued their impressive progression being selected for yet more international events this summer and must be hot prospects over the next few years if they can keep up their form and the learning.

Last but not least, congratulations to all the sailors for taking part at a great venue. Certainly one to be remembered! But the biggest congratulations must go to the two winners, so Niamh and Ross, and Vita and Milly – may the wind go with you at this summer's events!