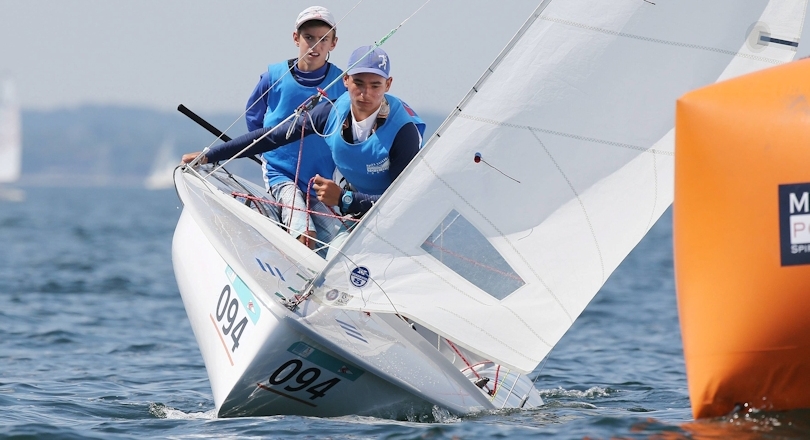 Racing stepped up a gear at the 420 World Championships on Friday 1 August, as the first day of final series racing got underway with the 390 sailors now seeded into 420 Open and 420 Ladies Gold fleets.

Race 7, the first of the final series, took place in a fluky 8-10 knot breeze. But soon after racing was abandoned as the gradient breeze from the south-east and the sea breeze from the north-east cancelled each other out with no hope of a breeze surfacing.

The unpredictable conditions, with shifts of 40 degrees and pressure changes of 5 knots, made the race course a game of snakes and ladders. As some boats were stalled in no breeze, those on the other side of the track were on a trip forwards and the right side of the course paid. Surprisingly the more experienced teams struggled to read the big shifts and massive changes in pressure and today was the day the posted their discard race scores.

Racing will get underway early on Saturday 2 August with three races planned and first start for the gold fleets at 1000 hours. The stage is set for an intense race day and potential podium decider. You can follow live race updates at worlds.420sailing.org

420 OPEN
Spain’s Jose Manuel Ruiz/Fernando Davila continue to extend their points margin, despite the fact that they, and many of the teams threatening their lead, scored their worst results of the series.

“It was really bad conditions for us today, the wind was really crazy. But it is just one day and it doesn’t matter,” said Davila. “There are two more days.”

The pair hold a 15 point lead, positioning them well to improve on their 5th at the 2013 420 Worlds. “We expected to do better than last year,” explained Davila, “and we are really pleased.”

Whilst the frontrunners struggled, the day’s biggest leaderboard gain went to the second youngest helm competing at the 420 Worlds, Ido Bilik from Israel, with crew Ofek Shalgi. The pair are both 14 years old, but young years were no hurdle to reading the breeze, as their shrewd understanding of the track saw them in the leading group from the start. They executed a perfect downwind leg to take control of the fifty-seven boat  420 Open Gold fleet and cross the finish first, pushing up from  8th overall at the start of the day to 2nd by the end.

“We had a good start and good speed. We understood the conditions and just did it,” explained Bilik. The pair admitted they were surprised to win the race and be placed so well on the leaderboard, but their coach has no doubts on potential. The team were in the leading boats from the start and felt comfortable in the conditions which are similar to their home waters.

Both sailors come from an Optimist background and just last year were racing at the Optimist Europeans, where Bilik finished 10th. So, the end of the summer will mark their first full season racing the 420 Class.

Three teams dropped out of the top 10 leaderboard, and three move up in what was a perfect day of racing for Israel. Nital Hasson/Yoav Shpliman join their teammates in the top 10, moving up to 6th from 11th at the start of the day, along with Switzerland’s Kilian Wagen/Gregoire Stewart up to  9th and France’s Robin Folin/Tao Manni in 10th.

420 LADIES
A shocker of a day for all the top teams as they struggled to read the shifty conditions and fluctuating breeze.

No change in the teams in the top 10 of the leaderboard, just adjustment in the order behind series leaders Kimberly Lim/Savannah Siew (SIN). Greece’s Aikaterini Tavoulari/Fotini Koutsoumpou move up to 3rd on tiebreak over Carlotta Omari/Francesca Russo Cirillo (ITA).

The Greeks managed to read the race course where the other top placed boats failed and were the only team in the top 10 who managed a single digit finish.

“We just read the wind better than the others,” explained Tavoulari. "We were steady in the top 5 boats and just tried to hold on, although our bad start put us in the second line.  We had a plan in our mind and tried to follow it, but during the race the plan changed and we just communicated very, very well to work out our best options.”

“This race was the hardest race we have had in the Championship. The weather was so tricky, so difficult. There were so many changes and I was so nervous,” concluded Tavoulari. Tavoulari/Koutsoumpou have been sailing for two years and came here intent on a podium finish, to improve on their 8th at last year’s 420 Ladies Worlds.

The race win was claimed by Clara Addari/Arianna Perini (ITA) who move up to 11th. The pair are fresh from an 8th place result at the ISAF Youth Worlds.

ISAF Youth Worlds gold medallists Silvia Mas/Marta Davila (ESP) commented this morning that their consistent scoreline, with a row of top 10 results, still gives them room for a discard score. Today was the day they knocked out their discard, finishing 30th in the forty-two boat gold fleet.

“At the first start we were 20th and then we did really, really badly in the first downwind,” explained Davila. “I don’t know what happened. Everything went wrong. But the good point about today is that the top girls were all bad, so we have all used a discard. There is going to be a lot of pressure tomorrow, so we need to do well and work hard. We will do the best we can.”

Racing Schedule for Saturday 2 August
3 races are scheduled for all fleets, with the scheduled warning signal brought forward to 1000 hours. 420 Open Gold and 420 Ladies Gold will start first, followed by the silver fleets.