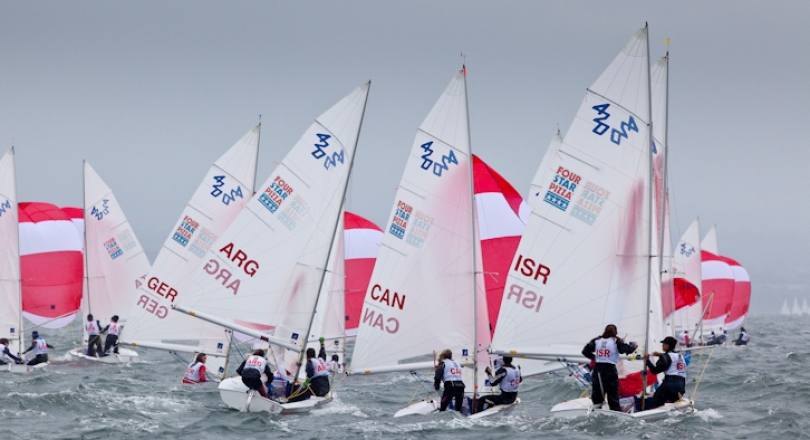 If conditions were challenging yesterday, they were even more so on day two of the Four Star Pizza ISAF Youth Sailing World Championship in Dun Laoghaire. A westerly to southwesterly breeze, blowing off the picturesque town on the outskirts of Dublin, was making the wind both shifty and gusty out on the water for the 343 future Olympic potentials, all under 19 years of age, who have congregated in the Emerald Isle from all four corners of the globe. At one point a squall passed over the fleet measuring 25 knots in the harbour.

Despite the testing conditions on the water, competitors in the eight classes all completed three races and with five races in total now sailed, have been able to discard their worst result.

One of the biggest leads is developing in the 420 Boys, where France's Guillaume Pirouelle and Valentin Sipan discarded their 18th in today's second race leaving them on 11 points, in turn 11 clear of Pieter Goedhart and Lars Van Stekelenborg (NED) after Spanish twins David and Alex Charles were declared OCS in today's final race.

"We are doing our best said," said Sipan, who with his helm won the 420 European Championship last year. The duo is considered among the favourites for honours in this event. "We have good speed and we are making quite good starts and we are following the shifts - it is good."

"The conditions are quite difficult with big clouds and it is very shifty," said Pirouelle. "But we like it when it is more windy." This is not the duo's first time in Dun Laoghaire this year having won the ISA Mitsubishi Youth National Championship, where it was equally shifty.

A 1-2-3 today has propelled Britain's Annabel Vose and Kirstie Urwin into the lead of the 420 Girls, where they are now on 7 points, 11 points ahead of today's race two winners Carrie Smith and Ella Clark (AUS), benefitting from Beijing gold medallist Tessa Parkinson being with them here in Dun Laoghaire as their coach.

"We didn't lead around any of the top marks," said Vose of today's results. "Places were going up and down, but we had some good reaches and we did some good decision making and looking at the next marks, which were quite key and just managed to gain places slowly."

Vose, 17, was 420 World Champion last year but with a different crew. Urwin only joined her in September. Having also attended the Youth Nationals here in Dun Laoghaire in April, the Brits came good today after they were nailed in yesterday's first race when they found themselves on the wrong side of a giant and persistent shift. "It is really shifty out there and it is really difficult - you see that from the results. It is such a high scoring event, so I think we did quite well to get a few top 10s today," said Vose.

Racing continues at 1200 hours on Monday 16 July with two races and conditions forecast to be stronger and even more gusty.