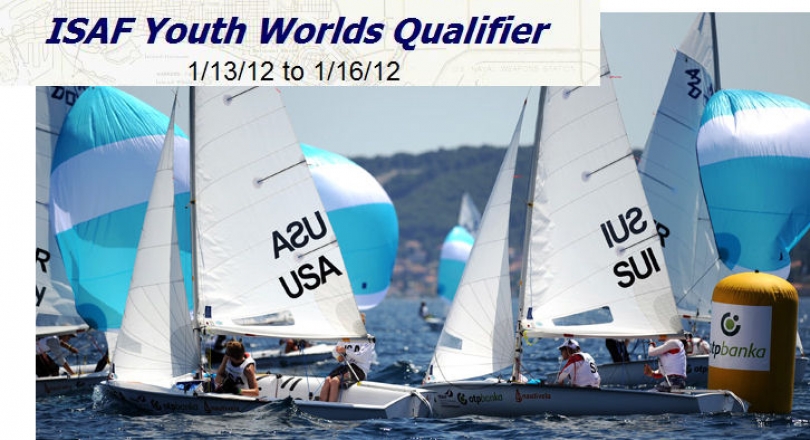 America's best teenage sailors will fire up their futures in the USA this weekend when they compete for places at the 2012 Four Star Pizza ISAF Youth Sailing World Championship.

The US Sailing Four Star Pizza ISAF Youth World Qualifier will be hosted by the Alamitos Bay Yacht Club, Long Beach, USA, from Saturday through Monday.

The list includes Zack Downing, 16, and Paris Henken, 15, of San Diego and Lily Katz, 16, of Brooklyn, N.Y., who were among the seven sailors recognized by sailing author, TV commentator and US Sailing President Gary Jobson on his annual Junior All-Star selections in the current Sailing World magazine.

Downing and Henken will be racing 29ers with crews Andrew Cates and Connor Kelter, respectively. Katz will race a 420 with Fiona Walsh.

The schedule calls for three races Saturday, four Sunday and two Monday, starting at noon, conditions permitting. Also depending on conditions, racing will be on any two of five possible courses inside or outside the breakwater, including one possible course near Belmont Veterans Memorial Pier.

Any member of US Sailing who won't turn 20 until 1 January 2013 or later is eligible.

Class winners will not only race in the Youth Worlds but will be invited to join the US Sailing Development Team as future Olympic prospects. The USSDT will have two teams in each class and a target age span of 16 to 24. More info

ABYC hosted the US Sailing ISAF Youth World Qualifier event in 2009 and 2008. Competitors will check in and start boat measurement on Friday.