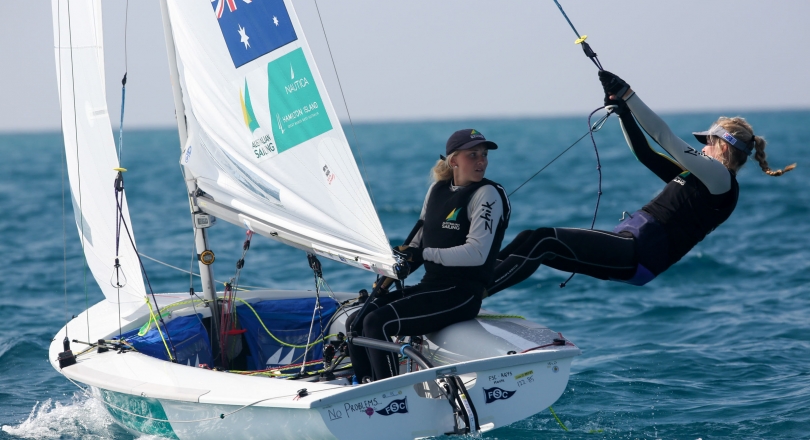 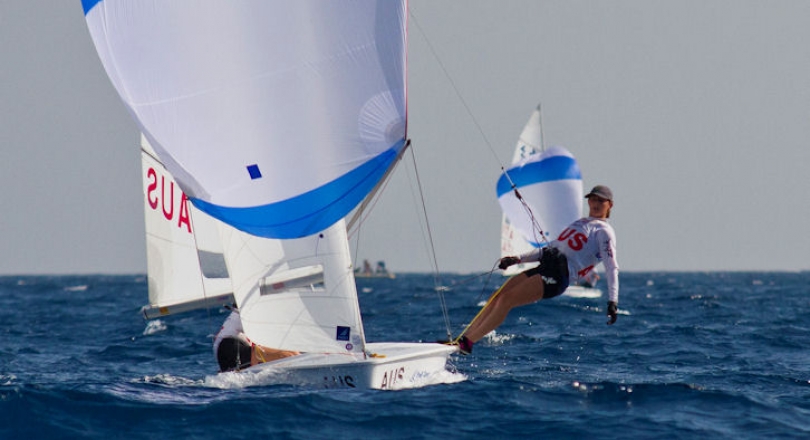 Just two years later, on Saturday 18 October, she and crew Jamie Ryan secured Australia's place on the starting line in the 470 Women event at the Rio 2016 Olympic Games.  The pair qualified to the Medal Race in the climax of the 2015 470 World Championships in Haifa, Israel and the medal race saw them in battle with the Spanish to secure the third and final Olympic qualification place on offer for Rio 2016. WIth dedication and focus everything is possible, particularly for this young pair who faced a bigger than most to climb to make it to the 470 Worlds.

Twelve months ago Carrie Smith was rushed to hospital with complications from stomach surgery, one of four operations she endured in the last year.

Now, fit and back on the water, she’s on top of the world having recently qualified Australia a quota spot for the Rio 2016 Games in the 470 sailing class alongside crew member Jaime Ryan.

“It was an upsetting time not being able to compete. It was a tough time, but it’s only made Jamie and I stronger,” Smith said.

Having been too sick to train, skipper Smith and crew Ryan focused on what they could do on dry land.

“I tried to do a lot of theory and tactics and studied winds at venues we’d be travelling to.

“Once they gave us the all-clear to train that was only three weeks before the World Championships so we had about five days on the water training.

“I think it shows you how determined you can be. Luckily I love this sport.”

The Fremantle-born sailor took up the sport when she was just two-years-old. Little did she know 18 years later she’d be chasing an Olympic debut.

“My family were really big into sailing on my Dad’s side. I started in the sabre with dad,” Smith said.

“I’m an only child so they had no one else to palm it off to!”

The 20-year-old started racing at age 6 in junior categories and then the 420 when she turned 12. That was the start of a friendly rivalry with Ryan.

“I started regular training then and was lucky enough to join WAIS (West Australian Institute of Sport) at 13.

“I’ve been to three Youth Worlds. I came fourth at my first Youth Worlds, then second at my second and then first at my third in 2013 in Cyprus. It was a pretty amazing achievement.”

After the Youth Worlds Smith made the natural progression to the senior class, the 470.

It was there she was paired up with her old foe Ryan.

Ryan grew up in Newcastle and took up sailing on Lake Macquarie alongside siblings Will and Sasha.

“I was quite late when I took it up at 15. We grew up on the lake, there were a lot of top Aussie sailors and so we lived on the water.

“Mum grew up sailing on the lake for fun, not competitively.”

Ryan’s family pedigree is impressive with three siblings competing competitively, including current 470 World Champion Will who competes with Olympic gold medallist Mathew Belcher. Sister Sasha sails in the same class with Amelia Catt, while the youngest Elise has competed in the 420 class.

“They’re the reason I compete. The support I get when I’m travelling just makes it so much easier,” she said.

“Will and I got food poisoning in Rio in August and to be stuck together with that… well that’s support.”

“To be in the same class, the same regatta. We’ve always been such a close family.”

After a year and half together, Ryan said the partnership with Smith feels natural.

“Carrie was my biggest competition growing up. We always have a bit of a laugh about that. But our personalities just work together. It’s a bit of a marriage you spend so much time together.

“We probably travel eight to 12 months of the year so it’s important to get on.”

For Smith, sharing the journey is half the fun.

“Once I started sailing with another person when I was younger there was no looking back to sailing by myself. Having someone to share those experiences with is important. As is the appeal of the crew working together.

“My job is to steer the boat and control the main sail. We try and share the tactics together. As a team we try to even out the work where we can.

“We sort of just slipped into the boat together easily. We have so much fun.”

The pair, coached by Olympic gold medallist Nathan Wilmot, finished last month’s World Championships regatta in ninth to secure a quota spot and also qualified themselves for the Australian Sailing Team. While the Rio 2016 Team won’t be selected until early next year, the duo were over the moon to prove their good form.

“We just kept looking at each other and saying ‘We did it!’ I was pretty proud. We deserved it,” Smith said.

“We still need to be selected but it’s a really good sign.”

When they teamed up in June last year they had their eye on the 2020 Games, now they could be competing at the first South American Olympic Games.

“I had my sights on Tokyo. But now to be an option for Rio it amazing. You’ve got to give it 100 percent. I just can’t wait to see what we can do,” said Smith.

After two weeks home with family in Newcastle and Fremantle the pair will reunite in Sydney next week for more training ahead of Nationals and the ISAF Sailing World Cup in Melbourne in December. 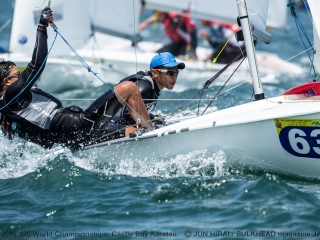