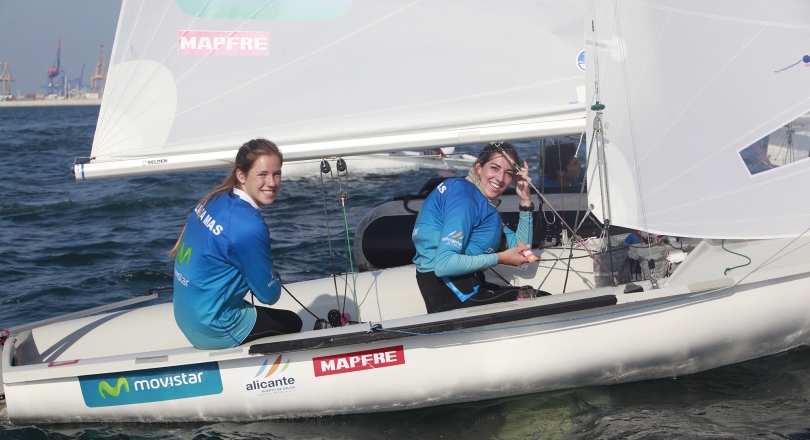 A consistent performance throughout the 7 race series and solid results, after discarding a 13th in the final, gave Silvia Mas and Paula Barceló an all top three scoreline.

Going into the final day of racing Mas and Barceló  were in a three-way tie, so desperately needed some convincing results to move into the overall lead.

Similar to the first two days of racing, the wind came late although with more intensity than the previous days, blowing from the southeast at around 9 knots. The final day of racing also saw the 116 teams split into gold and silver fleets after the qualifying series of 4 races.

Mas and Barceló started the day strong, winning the first race to move into a clear overall lead. The Galicians Andres Alvarez and Pablo Garcia were second and Carlos and Ignacio Balaguer remained in third place.

For Mas and Barceló, their direct rivals,  Maria Bover and Margaret Alba finished 23rd in race 5, in what turned out to be their worst result of the series.

Onto race 6, the second race of the day, with the win to Adrian Dominguez and Marta Dominguez, Mas and Barceló in 2nd and  Santi Mas and Luis Mas in 3rd.

Whilst Mas and Barceló were still safely heading up the leaderboard, the fight for the podium was far from over. In the final race of the day Maria Bover and Margarita Alba took the win, followed by Enric Noguera and Ivan Szymansky, with Adrian Dominguez and Marta Dominguez in 3rd.
Mas / Barceló finished in 13th place, but this race counted as their discard, so they claimed victory with a 6 point margin over Noguera/Szymansky, and Bover/Alba were in third.

Commented after racing, Mas said, "We feel very good running to win this championship all because as we said just started sailing together and this motivates us to keep going and keep struggling. Every day has been going better and today we managed to make good starts and sail fast.”

Reflecting on the 2013 420 Worlds held in Valencia in 2013, Paula Barceló said, "Valencia at first I did not much like the world’s here last year. But the truth is that we have been learning every day. There have been many different conditions. It has been a difficult field but in the end everything has gone very well.”