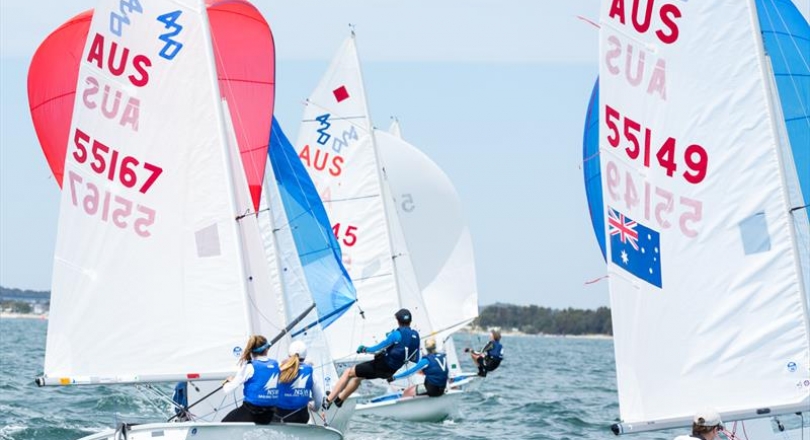 Final results at the Yachting NSW Youth Championships stand at the close of racing on Sunday, the breeze shutdown thwarting any chance of a start on Monday October 5, 2015 for all classes other than the Optimist Green fleet.

Locals described the morning winds on Botany Bay as Katabatic, a local offshore wind that occurs when the land cools more quickly, and to a greater extent, than the sea, setting up the land breeze circulation.

Close to 300 dinghies and skiffs headed to their respective course area in hope but the window was too tight and after an hour long wait officials sent everyone back to shore and out of the hot sun, and that's where the racing ended.

As event manager Andrew Hawkins highlighted, "it's a pity about the final day but the sailors understand no wind is part of the sport".

The 420 fleet was joined by other youth classes, including Optimist, Open Bic, Sabot, Laser 4.7, Laser Radial, 29er and Flying 11.

Seven races down, and across all the classes racing, the only all girl team to take out the top podium placing at the NSW states were Youth Sailing Team sailors Charlotte Griffin and Chelsea Connor in the 420 class, their first win as a new combination. Representing Middle Harbour Yacht Club and RPAYC, Crush edged out Xavier Winston-Smith and Alec Brodie on Selden for Sailing, and Connor admits it feels good to beat the boys. "They were trying to psyche us out this morning saying there was only one point in it, but we don't let them get to us.... it's good to have a joke around," she laughed.

Finishing so close to second illustrates the tight class racing and gave the teens plenty to fight for. Connor found the experience of incorporating tides and racing on Botany Bay really helpful for their learning.

The pair, who met four years ago sailing Optis, have a busy calendar ahead; Sail Sydney, Sail Country at Albury/Wodonga, the Australian Youth Championships in January at WSC then QLD Youth Week. At the end of the circuit is their final aim for the season, qualifying for the 2017 youth world title.